Interpersonal dysfunctions in senior management teams have a big impact on ROI in the experience of angel investor Scott Sill. As a result, Sill now prioritizes what he calls “people analysis” as highly as market analysis.

Scott Sill founded CB Nesbitt & Co in 2003 to advise and invest in startups. As Managing Director, he noticed within the first few years that failures to make returns frequently re- sulted from interpersonal dysfunctions in senior management teams. In response, he committed to developing his skill in correcting these problems with help from specialist Dr. Jody J. Foster, author of The Schmuck in My Office (see synthesis on page 5).
According to Sill, that skills development has paid off tenfold. “There is always a cautious relationship between us the investors who sit on a board and make decisions for the companies in which we invest and the companies themselves. But since we gained a better handle on how to work well together, we can focus more on how to make these businesses grow,” he says.Managing the egos of narcissistic CEOs

Sill reports that learning how to deal with narcissistic personality types has been the most useful in his work with CEOs. “Narcissism is good in a CEO provided it’s only in small doses,” he says. “Particularly in startups, it’s often part of what drives our entrepreneurs to be disruptive. But we run into trouble when this trait also drives them to hide any difficulties, so bad news doesn’t surface until it’s dire straits.”
The risks go beyond the failure to be transparent about problems: “A narcissist tends to be exceptional in a certain box, but that narcissism can change from a positive to a negative very quickly.” Sill’s most expensive setback resulted from interpersonal dysfunctions with a narcissistic CEO. “I didn’t frame our conversations with him well, because I didn’t think about the fact that we were dealing with someone who couldn’t stand to hear anything negative about his company. We couldn’t appreciate each other’s point of view, and it resulted in a very ugly firing of the CEO. It cost us $5 million to remedy the situation and left the company in transition for about a year. If I could go back and do it again, I would try to find a way to keep him rather than just replace him by playing to his strengths. I would frame our discussions from the beginning in terms of what the company needs to be successful, rather than it being about him.”
In the years since, Sill has worked out strategies for identifying where narcissism could be problematic as well as a better communication plan for dealing with such dysfunctions. “By being more careful in how we approach these kind of leaders, we have succeeded in totally changing the dynamics of our relationships with the CEOs,” he reports. “We’re here to help, but we had to learn how to communicate our feedback around problems and challenges in a way that didn’t threaten the egos of these CEOs to increase our chances of getting them to accept our help.”

Excerpt from Business Digest n°278, July-August 2017:
Based on an interview with Scott Sill, Managing Director at CB Nesbitt & Co (June 2017). 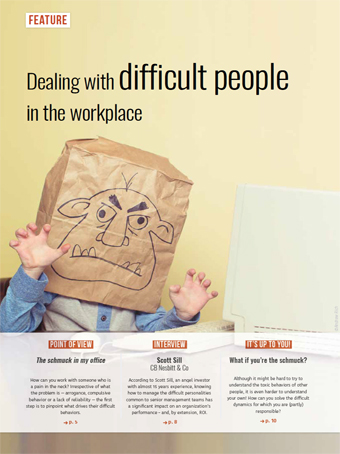