What does human vs. machine intelligence mean for work?

As new technologies are used to boost performance, measure outcomes and control the proper execution of company processes, how can humans find a sense of meaning in their work? Does the automation of the workplace signal the end of the dominance of human intelligence, which will now play second fiddle to pure analytical thinking? This outcome is far from sure; despite our imperfections and limited cognitive abilities, human beings remain the primary strategic asset for companies.

Big data is now used to manage human resources, while machine learning is applied to customer relations, and algorithms are used to inform strategic decisions. Digital technology has spread to every business function in recent years, with increasing automation — and closer monitoring — of processes across the board. Some of these new trends are causing concern. In Japan, for example, an insurance company has just replaced 25% of its staff with artificial intelligence. Meanwhile, the boss of the Bridgewater pension fund plans to use artificial intelligence for three-quarters of his decision-making, arguing that machines are more reliable than humans. In short, technology is all around us, and this hegemony is beginning to raise questions, the most important of which is: How can work be made meaningful for humans when it’s increasingly dominated by technology?

Regaining confidence in the value of human capital
Although machines have become highly efficient at performing many tasks, they still lag far behind humans in certain areas. The chief failing of machines is their inability to “see the bigger picture” and to assimilate non-quantifiable notions such as social context or individual characteristics. Although robots may well be able to detect a drop in productivity among employees, they cannot make the distinction between workers who are demotivated by the content of their missions and those experiencing personal difficulties. Moreover, machines are still ineffective in terms of emotional intelligence: they do not
know how to decipher a person’s mental state, still less off er comfort to someone who is going through a rough period. Finally, artificial intelligence lacks creativity: it cannot create something out of nothing. While AirBnb algorithms are very effective at guiding you to the location that suits you best, they could never have come up with the idea of couchsurfing in the first place. In spite of this, 67% of the leaders of major companies worldwide now believe that technology generates more value than employees! Korn Ferry, the global recruitment giant, was so taken aback by this figure that it decided to compare the return on investment in physical capital (real estate, technology, production tools, etc.) and human capital. Its verdict? The potential value of human capital in the world economy is $ 1.2 billion — 2.3 times higher than the potential value of the productive capital! In other words, humans continue to be the key strategic asset in business, an asset with a particularly attractive ROI since every dollar invested in human capital is thought to yield $11.25.

Introducing human sciences into the world of business

Scientific methods play a prominent role in technophile societies. Hard science’s dominance is confirmed by figures from higher education. In France, for example, although 60% of the students enrolled in universities choose the humanities, the balance is reversed as the level becomes more advanced. What’s more, 92% of doctoral students in the hard sciences are supported financially during their dissertations, while only 38% of their colleagues in the human and social sciences receive the same backing. It is the same story when it comes to hiring students: young graduates with a scientific or technological profile find jobs much more quickly. Does this mean that the human and social sciences are doomed to play a secondary role in the real economy? In recent years, some professions — anthropologists, sociologists, ethnologists, historians and the like — have taken up center stage in several sizeable companies. The strengths of these experts are numerous: they are trained to observe and dissect the facts by focusing on individuals, the way they lead their lives and their deepest motivations. The data that these specialists handle is not big data, and their sights are not set on statistical accuracy; on the contrary, they bring behaviors or expectations to the surface that could not be articulated in statistical marketing studies. There is no shortage of examples of the effectiveness of these “soft” approaches in business. Take Lego. Thanks to an ethnological analysis, in 2008 the company decided (rightly, it turns out!) to refocus on its traditional bricks, despite databased marketing studies having declared the decline of these bricks to be irreversible thanks to the emergence of more sophisticated toys. Similarly, it was a sociological analysis that convinced the Servier laboratory (rightly!) to develop prevention-oriented off ers to improve its reputation among doctors and patients.

Excerpt from Business Digest n°277, June 2017:
Inspired by the book Sensemaking, the power of the humanities in the Age of the Algorithm de Christian Madsbjerg (Hachette Books, March 2017). 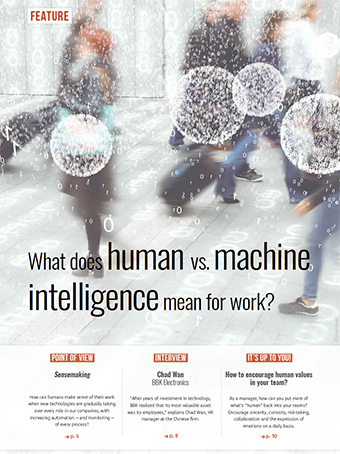