Resilient leadership at Facebook, because the work is never done

In the spring of 2016, Caryn Marooney was diagnosed with breast cancer just as she stepped in to manage Facebook’s entire communications team. One year later, she shares what she’s learned about resilience and the power of asking for help as a leader.

In early spring 2016, Facebook’s then VP of Technology Communications Caryn Marooney stood at a crossroads. The young mother had just been off ered a major promotion to take over the company’s entire Global Communications team. Almost simultaneously, she was diagnosed with breast cancer. With the support and encouragement of her bosses, CEO Mark Zuckerberg and COO Sheryl Sandberg, Marooney decided to accept her promotion. Reflecting on this decision today, almost exactly one year later, she says: “It was selfishly motivated: I didn’t want my cancer to become my full-time job. But I am also certain that I am a better leader in my new role than I would have been if I had never gotten sick.”Learning that leaders can be emotionally vulnerable AND competent.
When Marooney found out that she might have cancer, initially she assumed it would probably mean having to turn down her promotion. “Thinking I was healthy, and then suddenly finding out I wasn’t made me feel insecure about everything,” she says. “My first instinct was to decide a plan on my own before telling anyone at work what was happening.”
She changed her mind in large part thanks to the example of open leadership set by COO Sheryl Sandberg after the loss of her husband in May 2015. Marooney recalls attending Facebook’s Leadership Day for Women immediately after finding out about her cancer and the powerful impact of Sandberg’s keynote address that day: “When she started talking about Seligman’s 3 P’s, I really felt like she was talking to me personally,” Marooney says. “Hearing Sheryl tell all of us, ‘I need help. Here is how you can help me,’ inspired me to question my own instinct to deal with my diagnosis on my own. I ended up going to Mark and Sheryl and just saying: ‘I might have cancer. I think I might need help, but I don’t know how’. And then, all of this incredible openness and support followed from that.”
Marooney also recalls being inspired by Sandberg’s resilience long before her keynote. “I remember the first time Sheryl addressed our team internally in May 2015 right after Dave had died. The first half of Sheryl’s talk was raw and emotional about what she was going through. The second half was our team asking her difficult questions about our business, and she was so tough and precise in her answers! That was the moment that I realized there really isn’t a contradiction between vulnerability and competency.”

Shifting the focus from your own success to the team’s success.
“Before the past year, part of me always thought that leaders had to look and act a certain way and have a polished, in-charge kind of presence,” says Marooney. “When I used to imagine me in my current leadership position, I would think to myself ‘I’m going to dress better, and I’m going to have all the answers.’ But instead, when I stepped into this role, my first words to the team turned out to be: ‘I just found out that I have cancer, so I really need your help.’

Extract from Business Digest n°277, June 2017 :
Based on an interview with Caryn Marooney, VP, Global Communications at Facebook (May 2017). 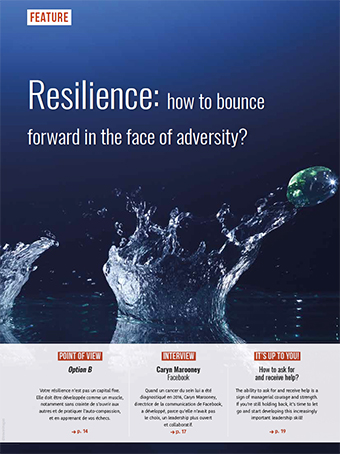