Achieving human excellence in the age of smart machines

How can human talent stay relevant in the face of evolving machine learning technologies? As more and more knowledge work becomes automated over the coming years, how will it shift our thinking around human intelligence and skills?

Between 1997 and 2007, industrial robots were responsible for the loss of up to 670,000 U.S. manufacturing jobs. Such losses will only continue, with the number of industrial robots expected to quadruple1. But blue-collar jobs are no longer the only ones at risk. Thanks to the advent of smart machines, white-collar workers too can expect to be replaced by “thinking” technology. For example, IBM’s Watson put 34 employees at the Japanese Fukoku Mutual Life Insurance out of a job at the start of 2017. With this automation, the insurer expects to increase productivity by 30 percent and save $1.65 million per year2. What can you do to smooth your transition to the “Smart Machine Age” — which is already upon us — and preserve your place in it? In Humility Is the New Smart, coauthors Edward D. Hess and Katherine Ludwig write that, since it’s hopeless to try to beat machines at their own game, you should just play a different game, arguing paradoxically that the best way for you to adapt to the new machine age is to become more human.

Only human: defining a “new smart”
Traditionally, “smart” is defined in terms of quantity of intelligence: she is smarter than he is because she knows more facts. This reinforces an individualistic culture in which we compare ourselves against others and try to “win.” However, given the speed at which technology can amass and analyze low-level data, the authors advise that “to be marketable and stay relevant in the SMA [Smart Machine Age], humans will need to excel at the kinds
of jobs and skills that either complement technology or are those that technology cannot do well— at least not yet.” In other words, when it comes to our traditional definition of “smart,” humans can’t compete against computers. While computers might always “outsmart” humans, of course we know that they also completely lack other aspects of human intelligence. According to the authors, this suggests that we can come up with a new, more human definition of “smart”. They advocate for one less based on ego and more on humility. Their idea of humility is not one of submissiveness but of open-mindedness to
the world as it is, unblinded by self-interest and self-deception. “In the SMA,” they write, “the winners will be those people who are less self-absorbed, because we need to open our minds, accept our mistakes and weaknesses, focus outward, and enlist others to help us think, innovate, create, and continually learn.” They define the “New Smart” by the quality of your thinking, listening, relating, and collaborating; your ability to handle uncertainty; and your openness to testing beliefs and trying new ideas. 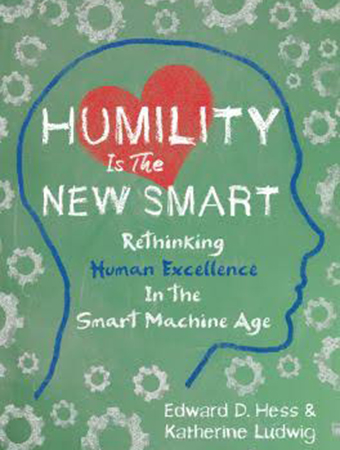 “Achieving human excellence
in the age of smart machines”

Based on Humility Is the New Smart: Rethinking Human Excellence in the Smart Machine Age, by Edward Hess and Katherine Ludwig (Berrett-Koehler Publishers, 2017).