When Markus Martin joined Ole Paper in 2007 as CFO, the Danish paper company had been in a critical condition for several years. The management team subsequently embarked on an unprecedented strategic shift in the midst of great uncertainty. Ten years later, the firm’s revenues had doubled. How did management succeed in overcoming their paralysis to radically transform the business?

In 2007, Ole Paper was in the midst of its third redundancy plan in five years. Revenue had fallen 40% over the same period and the management team began considering closing down the entire business. The paper industry was in full-blown crisis: the written press (traditionally its best customer) was in decline, with computers increasingly replacing pen and paper, and the Danish government had prioritized recycling, which slashed production needs. As Markus Martin recalls: « At the time, when I joined Ole, my own mission wasn’t clear. I had been hired as CFO but didn’t really know if my role would be to take part in the liquidation process or to try to rescue the company. We were exactly in what Joseph Badaracco calls a ‘gray area’: we didn’t have any visibility on our future revenues over a few months but had to make a decision because we were losing $ 200,000 every month. »
Making decisions involves risk-taking
Martin explains that, in gray areas, the tendency is to avoid making decisions. « The easiest solution, given the lack of available information, is to wait until you are certain about things so you don’t make any mistakes and in the hope that the fog will dissipate all by itself ». ‘Decision paralysis’ reigned in Ole between 2002 and 2007, plunging the company further into recession with each passing year. « When I took office in 2007, Ole’s turnover was dropping by almost 10% a year and the company had let go of 20% of its 4,000 employees. In short, the situation had become untenable. Even though we were all at sea, we had to make a decision: modernize and carry on with our business, put the key under the door, or make a radical strategic shift. It was a decision that had been put off for far too long. »
Restrict decision-making
Ole is a family business, founded in 1924, with a pyramid structure that concentrates the strategic decisions at the top. In this context, the management team had chosen to isolate itself so it could think about the future of the company without involving other parties. 3that might seem mad when everyone else was swearing by collective intelligence but I think in retrospect that it was an excellent decision », says Martin. « The risk, in the gray zone, is that you want to process too much information and take everyone’s opinion into account – staff, customers, shareholders, and so on – all of whom have conflicting interests. There’s a danger, in the end, that you just increase the dilemma and block any action. »

Taking the right decisions even when the outlook is hazy 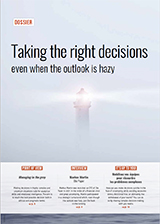 Based on Managing in the gray: Five Timeless Questions for Resolving Your Toughest Problems at Work by Joseph Badaracco (Harvard Business Review Press, 2016) and on an interview with Markus Martin, CFO of Ole Paper, Denmark (February 2017).