Why waste your time in meetings?

On average, you spend a third of your workday in meetings. Meanwhile, “real” work piles up, leading to endless catch up and discouragement. According to an Epson study, in 2011 in the UK alone, unproductive meetings cost companies $41 billion dollars. Is there a cure for the “meetingitis” that continues to plague companies? 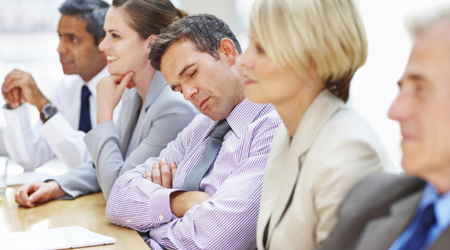 1. Lack of flexibility fosters “meetingitis”
One of the problems is that companies are organized into separate departments, but people work on projects across departments. As a result, meetings are the only way to bring people together. Another obstacle is the tendency among managers competing for resources to use meetings as a means to display their achievements. And what about when things aren’t going well? Again, meetings are desirable because they offer an opportunity to put the responsibility on others.

2. Too many meetings spoil the meeting
Managers too often ban Facebook but continue to distract teams by scheduling pointless meetings. Unless a meeting is truly necessary, five people who attend a two-hour meeting equals ten hours of wasted time. Multiply this figure by each person’s hourly salary to translate that time into money.

3 How to make meetings more productive
Both common sense and radical initiatives can help put an end to unproductive meetings. There are several rules to respect:
• Define an objective.
• Create a clear meeting agenda.
• Convene only the people who truly need to be there.
• Distribute any informational support you plan to use in the meeting ahead of time.
• Limit visuals during the meeting.

Should you get rid of chairs?
At Atomic Object, a Michigan-based software publisher, the 30 members of the firm meet every morning, without coffee, muffins, computers, or even… chairs! On average, the meeting lasts five minutes. “This method demonstrates organizational flexibility, and it’s not reserved for thirty-somethings and start-ups but for everybody who is aware that standing up increases people’s concentration and eliminates unproductive arguing.

Read our dossier
Why waste your time in meetings?

Based on “When You’ve Had One Meeting Too Many” by Carson Tate (The New York Times, February 2013), “Why Business Meetings Are Often a Waste of Time—and Productivity” by Robert Pozen (The Wall Street Journal, September 2012), and “Aux Etats-Unis, les reunions debout sont tendance!” (Les Echos, February 2012).
Business Digest nº 235, april 2013

Stand-up meetings are part of a fast-moving tech culture in which sitting has become synonymous with sloth. The object is to eliminate long-winded confabs where participants pontificate, play Angry Birds on their cellphones or tune out.