The primary mission of protest movements is to provoke change. So, if you seek to spark transformational change within your own organization, perhaps it’s time to take a page from the activist playbook.

Activist and protest movements are sometimes stunningly effective at changing corporate practices. In a 2015 study1 of 300 Fortune 500 corporations, Mary Hunter-McDonnell and her coauthors found that 22 percent of boycotts ended with the company giving in to protestor demands. Change inspired by activists can result in big wins all around. In the 1980s and 90s Nike was assailed by activists for the alleged sweatshop labor practices of its suppliers. In response, the company eventually revamped its policies and is now the most admired U.S. apparel manufacturer, according to a 2017 Fortune magazine poll. Wal-Mart has been a target of advocates for a higher minimum wage. It reacted by announcing pay rate hikes for 1.5 million of its workers in 2015 and 2016. Given the effectiveness of protest movements at effecting change, perhaps it’s time for you to take a look at their methods for boosting your own internal change initiatives. Whether it’s jump-starting a corporate social responsibility program or breaking down corporate silos, you might find it instructive to take a look at the activist playbook. To successfully implement change, protest movements must be unified, have goals and create a plan. The same is true within an organizational setting. Indeed, inspiration runs in the opposite direction too, with protest movements seemingly influenced by business models. In the words of Srdja Popovic and Andrej Milivojevic at the Center for Applied Nonviolent Action and Strategies in Belgrade: “Running a campaign is similar to running a business. In order to succeed, you must have answers to two questions: First, ‘Where you are going?’ and, second, ‘How are you going to get there?’ »

Keeping your eyes on the prize
The answer to the first question, “Where are you going?,” lies in the vision you see for the future. According to the Harvard Business Review’s Greg Satell and Srdja Popovic, “Clearly defining change is a consistent theme in successful movements. Gandhi wanted independence from the British. The civil rights movement wanted specific legislation passed….These were all tangible goals that they could build a strategy around.” Currently the executive director of the Center for Applied Nonviolent Action and Strategies (CANVAS), Popovic knows something about the subject. He was a leader of the student movement that helped topple Serbian President Slobodan Milosevic. Satell and Popovic emphasize the need to clearly define success and inspire audiences: not simply criticize the existing state of affairs. Joe Nocera makes the same observation in a piece for The New York Times2. Writing about the now-moribund Occupy Wall Street movement, he notes, “While they had plenty of grievances, aimed mainly at the ‘oppressive’ power of corporations, the Occupy protesters never got beyond their own slogans.”

Leading to effect change
Nocera makes another important point about the Occupy movement: “The Occupy protesters were purposely — even proudly — rudderless, eschewing leadership in favor of broad, and thus vague, consensus. It’s hard to get anything done without leaders.” In their student guide, the CANVAS group agrees there is a need for a leader when it comes to realizing change, noting that most great leaders of successful protest movements possess three characteristics:
• A vision for the future, which may be shared by a wide base of supporters.
• Strength of personality, which often includes willpower, motivation, and commitment.
• Self-control: great leaders do not misuse their authority.
At the same time, the writers note that while some movements have had highly visible charismatic leaders, such as Gandhi or Martin Luther King Jr., other movements have had low-profile leaders, or have even been led by groups or committees, such as Czechoslovakia’s Velvet Revolution. 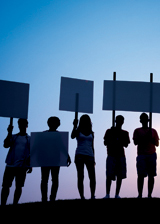