Simon Esner is a firm believer in the value of delegation. He credits this key leadership competency with giving him “the gift of time” and enabling him to unleash the collective performance of his business development unit at BaxterStorey, one of the UK’s leading catering services providers.

Gaining the gift of time
“Delegating elements of my workload that others could do at least as well or better than myself created a game-changing opportunity for me to have more time to grow the business.” In concrete terms, within two years of beginning to delegate (1999 to 2001), Simon Esner had the time to grow his company’s sales from £8 million to £15 million.

Seeing the big picture
“As I continue to grow and gain experience as a leader, my role has become orchestrating our collective development of sales growth opportunities. My ultimate aim is to empower as many of my team members as possible to do as much of what I do as possible.”

“It’s important to learn to trust yourself and trust others.”

Trusting others to succeed
“It is part of my personal ethics as a leader to take others at face value and simply trust them,” says Simon. “This creates the freedom they need to play their part, which benefits our work as a whole.”

Moving forward after delegation goes wrong
“Of course, delegation does not always goes as planned. I have handed over tasks that were subsequently mismanaged by those on the receiving end. It made me stand back and question my approach to delegation. In response, I have tried to learn to be more careful about ensuring I have taken the time to listen and observe and verify a potential delegatee’s state of mind.”

Simon Esner is a Director at Baxter Storey. He joined the company in 1997 to lead the company’s sales growth and business development. Between 2011 and 2014, Simon served as a judge in the prestigious BIFM Award for Excellence in Customer Service. He is a chef by training and also holds qualifications in hospitality and catering. 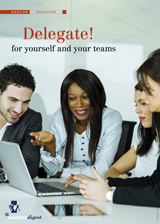 Based on The gift of time: How delegation can give you space to succeed by Gail Thomas (Capstone, March 2015), “How Office Control Freaks Can Learn to Let Go” by Elizabeth Grace Saunders (HBR, October 2013), “Signs That You’re a Micromanager” by Muriet Maignan Wilkins (HBR, November 2014) and the Interview with Simon Esner, Director, BaxterStorey (United Kingdom), June 2015.