How can you better understand and respond to the confusing world around you? From 2011-2014, the American intelligence community sponsored a forecasting tournament that brought together over 20,000 participants from a wide variety of backgrounds and domains. A study of this tournament reveals the methods and traits that anyone can learn to navigate uncertainty more intelligently.

Decision-making inevitably involves forecasting. Whether you work in HR, business development, IT, etc., accurately foreseeing possible outcomes is a critical component of intelligent decision-making. At the same time, forecasting is infamously difficult, and arguably becoming ever more so due to rising complexity and uncertainty. Coauthors Philip Tetlock and Dan Gardner present the insights gleaned by their study of the winners of a massive 2011-2014 forecasting tournament – a group the authors refer to as “superforecasters” due to the impressively superior accuracy of their forecasts. So what set the superforecasters apart from the others? “It wasn’t whether they had PhDs or access to classified information. Nor was it what they thought — whether they were liberals or conservatives, optimists or pessimists,” explain the authors. “The critical factor was how they thought.”

EMBRACING DATA-DRIVEN THINKING
The study suggests that the subjective judgment of superforecasters is less susceptible to common human cognitive biases and limitations due to their synthesis of a wide range of information and viewpoints.

You don’t have to be a math whiz…
How important is your IQ and education to your forecasting skills? “Although superforecasters are well above average, they did not score off-the-charts high and most fall well short of so-called genius territory, a problematic concept often arbitrarily defined as the top 1%, or an IQ of 135 and up,” report Tetlock and Gardner. “So it seems intelligence and knowledge help but they add little beyond a certain threshold.” In particular, an ability to understand and work with numbers was found to be a success factor. “The superforecasters are a numerate bunch,” admit Tetlock and Gardner. At the same time, being bad at math doesn’t necessarily mean you can’t become a superforecaster: forecasting rarely requires you to crunch numbers. For example, Tetlock and Gardner describe superforecasters as Bayesian thinkers but note that this doesn’t necessitate being able to execute the mathematical equation: “What matters far more to the superforecasters than Bayes’ theorem is Bayes’ core insight of gradually getting closer to the truth by constantly updating in proportion to the evidence.”

…to tap into a more data-driven way of thinking
When faced with a problem, superforecasters first “unpack the question into its components.” Next, they seek to establish the base rate, or outside view, to place the problem within a wider class of phenomena… 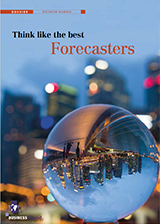