Automotive, energy, space travel and passenger transport are the many sectors Elon Musk is at the forefront of “shaking up”! Since he made his fortune developing PayPal and eBay in 2002, the South African entrepreneur has endeavored to create value in the industries that have yet to become intensely competitive. What are the fundamentals of this innovation strategy, from the man who can make the biggest companies on the planet tremble (from Ford, to Arianespace to BP)?

“Hello everyone, my name is Elon Musk and I am the founder of SpaceX. In five years, you will be dead,” said Elon Musk to amused representatives from the space industry at the Satellite Lounge in Washington in 2006. 10 years later, Arianespace, or the Russian International Launch Services, are no longer laughing. SpaceX has become a major player in space travel since the company won a 2014 contract with Boeing for $2.6 billion to develop capsules to transport American astronauts to the ISS. Musk has used this same innovation strategy in the automotive industry, the energy sector and in high speed passenger transport.

Dream big and see far
“The greatest minds of my generation spend their time asking themselves how to make people click on ads. It sucks,” says Jeff Hammerback, formerly of Facebook and now the head of Cloudera for whom, on the contrary, Elon musk is a true innovator. Musk indeed aims to revolutionize entire sectors of society with his electric cars, solutions for the storage and production of solar energy, and inexpensive reusable rockets. Each of these products is merely the visible face of an inordinate ambition. When he developed the satellite launchers, it was in fact preparation for space travel. His objective is to install a primary base of 80,000 people on Mars by 2040. Eventually, he imagines that a million people could live there. Similarly with Tesla Motors, his objective is not to build pretty cars for yuppies, but to drive a profound societal change by moving people toward electricity consumption that is based on renewable energy. At the same time, he has developed solutions for the production and storage of solar energy for individuals.

Take risks and don’t be afraid to fail
It matters little if this ambition drives Elon Musk to take foolish risks. In 2008, Tesla, who had processed 1200 orders for its first electric cars, failed to deliver more than 50 models. The advance payments by clients had been spent and the group had only 9 million dollars in the bank, while 4 million dollars went up in smoke each month. 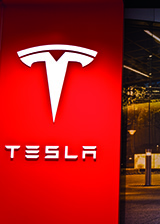 Based on Elon Musk: Tesla, SpaceX, and the Quest for a Fantastic Future by Ashlee Vance (Ecco, May 2015).