What do Airbnb, Uber and Netflix have in common? They are all proficient at recreating value in markets where the competition has been intense for decades, forcing prices down. What can we learn from these so-called «disruptive» companies that leverage innovative business models to uncover new growth drivers?

The success of some of the most disruptive players of the moment – including Airbnb, Uber, BlaBlaCar and Tesla – comes down to their ability to innovate around value creation. Even in markets that are already saturated, these companies offer customers new services. How is this unusual? Over the last 10 years and the advent of “blue ocean” strategy, the challenge facing businesses has been to break away from the competition and dominate relatively uncontested markets. Today, thanks especially to digital technologies, firms can propose new value in sectors that have already been tapped: transport (Uber), accommodation (Airbnb), television (Netflix), automobiles (Tesla), and so on. Warding off your rivals is no longer the goal – it is about “making the competition irrelevant,” argue Kim and Mauborgne, professors of strategy at INSEAD.

Vision: shift the demand
“What are the defining characteristics of breakthrough innovations today?” asks François Lévêque, economics professor at Mines ParisTech. “First, they highlight an unmet consumer need and create a new demand. BlaBlaCar, the carpool firm, doesn’t just cater for customers who would otherwise have taken the train or hitched a lift. Some of them would have stayed home.” Lévêque argues that the distinguishing trait of business leaders who revolutionize their industry is this: they do not see their market as a “red ocean” but as a potential growth area. Customer dissatisfaction, high prices and complicated services are all good reasons to break into a market that seems overcrowded at first sight. The target for these leaders is to shift demand so they can capture the marginal value that has been overlooked by the established players. It is a scenario that is particularly apparent in the world of retail banking. While traditional players expand their services as a way of countering the cut-throat competition that forces prices down, fintech start-ups reinvent the value proposition using mobile payment, P2P lending, crowdfunding, and so on.

Organization: adopt a platform approach
How can you embrace growth in a saturated market where the available resources (capital, talents, and so on) are limited? The most disruptive businesses minimize infrastructure costs by adopting a systematic methodology. They outsource the burden of managing a large slice of their assets to third parties: car owners in the case of Uber, content producers for Netflix. Airbnb, even though it has virtually no property to its name, is worth almost three times as much on the stock market as Accor, which owns 4,000 hotels worldwide. This is the strategy employed by “platform companies”, according to Google chairman Eric Schmidt in his bestseller How Google Works (Grand Central, September 2014). The goal is to open up to the outside world and draw on its resources (ideas, skills, assets, and so on) while saving on overheads. It is a method that is starting to enthuse some household names. Nintendo has been using independent developers to create its games since 2012, which makes it the largest employer of freelancers in the video game industry. Meanwhile, at P&G, more than half of new product initiatives originate outside the company. 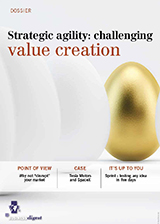