SNCF: how it is disrupting its own business model

SNCF has embarked on a major transform of its business model since Guillaume Pépy took over the reins in 2008. The aim? To switch from out-and-out rail transport to a local services approach. The French rail operator is putting the focus on radical innovations such as carpooling (iDVROOM), peer-to-peer car rental (OuiCar), coach transport (OuiBus) and on-demand TGVs (TGVPop). In short, SNCF has decided to hack its own traditional model in an attempt to withstand the onslaught of the «new barbarians.»

SNCF has faced attack from a range of new competitors over many years. Its traditional rival was the car, followed by budget airlines in the early 2000s, and, more recently, European coach companies. President Guillaume Pépy freely admits, however, that the pace has quickened over the last few months with the arrival of new barbarians like BlaBlaCar, Drivy and Flixbus, which pose a direct threat to SNCF’s business. The rail company has no intention of standing idly by. It is multiplying its takeovers and innovations to maintain its competitiveness on the European market, even if it sometimes means cannibalizing rail transport, which has been its historical model since 1938.

20 years of diversification
When Pépy joined SNCF in 1988 as chief of staff to Jacques Fournier (chairman of the board at the time), the state operator had undergone no major changes since it was founded as an industrial group in the 1930s. While the launch of the TGV (high-speed train) in 1981 did indeed revolutionize passenger transport, prohibitive ticket pricing failed to subdue the competition, which intensified over the following three decades. The car is still France’s preferred means of transport; low-cost airlines are gaining ground in Europe; and bus companies are beginning to link the continent’s major capitals. To withstand the onslaught of competition, Pépy decided to … Read more 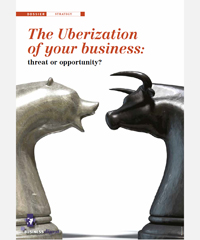