“In souls nobly born, valor does not depend on age.” This quote from the 17th century French classic Le Cid aptly describes the mindset behind reverse mentoring, where young employees teach seniors new skills. Not only does this scheme contribute to individual knowledge development, but it also helps infuse an organization with positive energy.

In late 2013, the executive committee of Orange telecom launched an atypical initiative. Each of its members was paired with a mentor, a young recruit who was to show him or her how to use social media. Danone, Axa, ENGIE, BNP Paribas, and SNCF have all also undertaken similar reverse mentoring schemes. Indeed, the idea is nothing new. In the early 2000s, General Electric CEO Jack Welch touted the benefits of reverse mentoring, though he did not receive much of an echo at the time. Things are different now, because of the inversion of the corporate age pyramid. By 2020, the majority of the workforce will be composed of agile, technically savy, hierarchy-adverse members of generations Y (born 1980-1995) and Z (born after 1995). Businesses should start taking advantage of their knowledge and know-how now, not only to modernize their organizations, but also to recognize and retain talented young people. In short, reverse mentoring presents numerous business advantages: learning opportunities for mentored seniors, recognition and integration for young mentors, and the keys to business transformation.

The principle: reverse the knowledge hierarchy
The basic principle behind reverse mentoring is that age-related experience is not the only type of experience that a company needs to be successful. Contrary to traditional notions of skills transmission from senior company members to younger ones, reverse mentoring considers the fact that young people also possess knowledge and skills that older ones lack or only have a limited understanding of. So the former are asked to pass it on to the latter. This notion turns traditional hierarchy upside down, putting bosses in the position of learners, a sometime uncomfortable posture. Practically speaking, during a series of fast-paced face-to-face or Skype meetings, a senior explores a subject in which he or she is a novice with a junior as his/her guide. “We have found that three main issues can be effectively dealt with through reverse mentoring,” says Isabelle Proust, CEO of Bernard Loiseau and a graduate of HEC business school, for whom she has set up a new alumni reverse mentoring program. “First, seniors can learn how to effectively use new or digital technologies. Second, generational behavioral differences can be openly discussed. Third, executives can discover the start-up mindset and way of doing things.”

The purpose: to support the company’s digital development
Proust clarifies,”Reverse mentoring for digital matters is more than technical initiation into social networks and other such media… 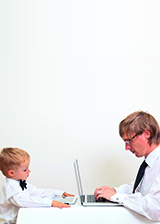