Problems you’ll face in the future thanks to robotics, genomics, and big data

Displaced workers, designer babies, the death of privacy and proliferation of cybercrime… How will you and your business respond to a few of the most problematic issues that the industries of the future are going to raise?

“For most of the world’s 7.2 billion people, innovation and globalization have created opportunity the likes of which has never before existed,” writes Alec Ross. In addition to opportunities, however, the next wave of innovation and change also brings its share of pressing new concerns and risks for you and your organization to address and manage.

Adapting organizations and talent to keep up with AI technologies
The word “robot” comes from two Czech words: rabota (“obligatory work”) and robotnik (“serf”). These etymological roots indicate the basic idea behind robotics: to create “a new class of ‘artificial people’ to serve humans.” From driverless cars to delivery drones to robot surgeons and robot teaching assistants, we are now seeing this century-long dream realized. While innovation in robotics in the coming years promises to bring great value, it also promises to bring massive disruption to human labor markets.

Preparing to know our genetic makeup
According to “one of the world’s most cited living scientists,” Bert Vogelstein, genetic sequencing is about to become widely available: “The cost is getting close to $1000, which is the bar that was set several years ago. But in 20 years, it certainly will be considerably less than $1,000. So the technology for doing that is already available, but not scalable to billions of people, but it will be in 20 years. So everyone who wants it, certainly in the developing world, could have his or her genome sequenced.” Vogelstein, however, is concerned about people’s readiness to handle such information. He emphasizes the need “to educate people as well as physicians about the meaningfulness or meaninglessness of particular challenges they might find, and to do it in a fashion that doesn’t cause great anxiety or anxiety out of proportion to the risk.” One of the biggest concerns around genomics are the possibilities it creates for so-called “designer babies.”

Governing choice, privacy, and security in the big data world
“Private companies now collect and sell as many as 75,000 individual data points about the average American consumer. And that number is tiny compared with what’s to come. 90% of the world’s digital data has been generated over the last two years. Every year the amount of digital data grows by 50%,” reports Ross. He warns that the power of all this data is set to shift norms in almost every aspect of human life: “Privacy is just the first in a series of concerns that big data will raise, as it inserts itself more inseparably into our lives.” Notably, Ross questions the implications of big data for human choice and creativity. 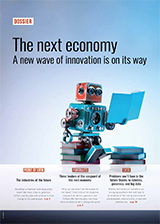