In addition to burn-out and bore-out, two professional afflictions born respectively from excess of work or boredom, there is a third pathology emerging. Caused by the demotivation that is provoked when daily tasks are plagued with absurdities, this condition is known as brown-out (literally, a drop in voltage in electrical power supply). How can you identify brown-out when it creeps into your office? And how can you eradicate it?

In August 2013, the anthropologist David Graeber had already created controversy by lambasting “bullshit jobs” in an article published in the magazine Strike1. He is also one of the first to have used the term brown-out to describe a new pathology affecting individuals who had lost touch with the meaning of their work and become radically disengaged. The concept may be recent, but the victims are already numerous. One study conducted by the Corporate Balance Concept office of nearly 1000 managers in 2016 revealed that only 5% of them suffered from burn-out, while 40% presented symptoms of brown-out. What makes companies so susceptible to this drop in energy? And what can prevent this condition from taking down teams?

Brown-out: the result of overwork and organizational stupidity
The primary causes of brown-out can be found in the recent evolution of work organization models. For more than a decade, an increasingly difficult economic climate has led companies to restrict the size of their workforces, which translates to increased workloads for individual workers and reduced time for them to rest or exchange ideas. The core issue is a widespread feeling of having to play catch-up and no longer having the time to do a good job. This is particularly detrimental to those who are the most invested in their assignments. There is more and more work, but also more and more standardized tasks at all levels of the company. With daily activities formatted, timed, and duly controlled, they quickly become devoid of any meaning. When assignments are reduced to mechanical tasks, staff become emotionally disengaged.
In this context, your position as a manager is particularly delicate: sometimes you yourself have tasks that are uninteresting (endless meetings, filling in reporting tables, etc.), while also needing to make time to guide, evaluate and motivate others. In keeping with the cult of performance, you find yourself putting pressure on your teams or responding to hierarchical demands that contradict your own values.
Finally, brown-out seems to particularly affect members of generations Y and Z. Raised in a society that values speed, spontaneity and immediacy, they expect their professional life to flourish and to quickly realize their personal projects and ambitions. Alas, the true nature of corporate life soon brings them back to reality. In The Stupidity Paradox2, researchers André Spicer and Mats Alvesson point the finger at the propensity of large groups to recruit brilliant young graduates and then assign them tasks with no intellectual stakes (like laying out pretty PowerPoint presentations), intended more to make an impression on clients than to meet actual needs. 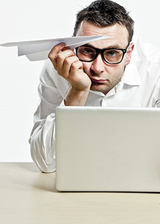