Every day, new startups emerge, reinventing business models and shaking up managerial practices that, until now, were perfectly valid. The leaders of large groups now know that if they do not change, the market will force their hand. Many want to give employees freedom to develop ideas that will strengthen the sustainability of the company. Real entrepreneurial skills are needed to generate these ideas and integrate them in transformative ways into the business – skills that a new form of reverse mentoring between start-uppers and managers can help to bring out.

Overcome bottlenecks
“The reverse monitoring that I promote, and which pays off right away, is a face-to-face interaction between one boss and another, between one decision-maker and another,” says Cyril Garnier, CEO of SNCF Development, the SNCF subsidiary for economic development and support for entrepreneurship. “This is not about asking Generation Y and Millennials to show their elders how to use digital tools (not that that would be useless): it’s about acculturation and generational diversity.” Julien Masson, cofounder of Whyers, adds: “Rather, it is about bringing the insight and experience of seasoned start-uppers to overcome specific blocking points in intrapreneurs’ projects” (see box). In three to four hours, years of experience are shared, enabling project managers from large groups to develop, through a mirror effect, their ability to fi nd innovative solutions to their projects.

Make use of fresh external perspectives
At SNCF, for example, in 2012, Bertrand Houzel wanted to create software to optimize the placement of trains in stations. In just three hours, John-Guy Park, owner of the startup Bon de Visite, helped him to identify bottlenecks by inviting him to review the pricing of the offer and to incorporate a financial director in the managerial team. For this mentoring to work, the start-upper does not need to master the subject. The idea is not to replicate a previous success. It is the distance that brings the solution, or the ability to be removed from the context. Another example: in 2013, the owner of an electricity SME created a sensor that measures the waiting time for taxis and the number of people waiting at stations to guide drivers to their customers. By listening to the pitch of several start-uppers, he suddenly became aware of the urgency to change his technical team to find a way to develop his mobile application in three to four weeks, which, up until then, would not have been possible for several years. Thus, the Olga by Visucab app was born. The strength of reverse monitoring is to help create this Eureka moment, a sort of “quantum leap” that enables you to think differently and to innovate rapidly. 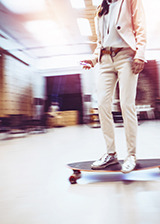