Is it time to rethink the role of managers,
authority and structure?

As engagement continues to decline, relationships continue to dematerialize thanks to digital technologies, the influence of generations Y and Z continues to increase, and so on, can companies stay successful without radically reinventing themselves? Leaders are questioning in particular the roles of managers, authority, and hierarchical structures. Here is an excerpt from the latest issue of Business Digest that provides a broad overview of a new alternative to the traditional take on these roles, known as holacracy.

“A company follows a holacratic approach when power is vested not in the people but in the organization itself, which is conceived of as a living being.”

1. From hierarchical pyramid to dynamic circles. When an organization chooses holacracy, it renounces hierarchy with “managers who manage” and adopts instead a circle structure of teams organized around a mission. These circles are “self-organized” but not “self-directed,” as their goals are defined by a superior circle. Job titles disappear. All employees fulfill one or more “roles” that the company needs. Each role is defined by three components: purpose, area, and accountabilities (actions to be taken).

2. Links instead of managers. In this type of organization, leadership itself is not disputed. However, the traditional management function disappears so as to eliminate the situation in which many local managers find themselves today: being forced to communicate messages from the top and the field. In each circle, holacracy establishes two different roles: a first top-down “link” to represent the upper circle (to assign people to roles, allocate resources, and so on) and a second bottom-up “link” to represent the circle below.

3. The three basic rules of holacracy. Holacracy rejects planned strategies with deliverables and indicators. Iteration is the key word and new information is integrated and managed in real time.
1. Only current tensions (differences between reality and the ideal) count.
2. Everything (decisions, roles, strategic choices, practices, and so on) can be reviewed at any time.
3. A good decision is a decision that can be immediately implemented.

Davidson Consulting, a horizontal organization. Davidson Consulting, an IT services provider, has kept to its “flat” structure, despite employing over 1,300 people. The CEO, Edouard Mandelkern, made the decision to limit the number of managerial levels to two in order to ensure organizational agility. The company posted annual growth of 26% in 2014 and was crowned Europe’s best employer.

Is it time to rethink the role of managers,
authority and structures? 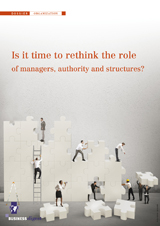