From zero to AI expert in five years

Daniel Rosenthal founded Logics System, an Israeli start-up known for its artificial intelligence solutions, in 2013. How did this self-taught man, who left school aged 17, manage to become fluent in computer programming before devel- oping into one of the world’s leading specialists ? The answer lies in a learning process adapted to his personal cognitive preferences.

“I discovered a passion for computer code in 2010, when Apple released the very first iPad,” Rosenthal begins. “I was fascinated not just by the device itself but also by the speed at which new applications were launched on a daily basis.” Rosenthal, a storekeeper in a chain of supermarkets at the time (he had left school aged 17), greedily devoured all the information he could find on the subject of development before launching his first application (a currency converter) in 2012. Five years later, Rosenthal heads up a company specializing in artificial intelligence with 90 employees and a turnover in 2016 of $ 180 million.

Identify your preferred learning method
“When I began to take an interest in iPad ap- plications in 2010, I first looked for a training that would teach me how to code as quickly as possible,” Rosenthal explains. “I managed to put $ 6,000 aside and took evening classes for three months, which were run by a private organization in Tel Aviv.” It was a bad idea, he explains, not because the training was poor but because the learning approach — a teacher in front of a (small) class of students — simply doesn’t suit him. “Objectively, I spent $ 6,000 and 40 or so hours on a course that did virtually nothing for me. I came out feeling lost and demotivated, just like when I was at school.” The problem, says Rosenthal, was that he was “not made for the kind of teaching you get at school. I have to be able to go at my own pace and put in a huge personal effort looking for information so I can retain it. In short, the very opposite of what the training course offers.”

Set up a personalized learning process
“Once the course was over,” continues Rosen- thal, “I thought about giving up. But then I read John Medina’s bestseller on cognitive abilities, Brain Rules , which encouraged me to find the learning process best suited to the way my brain functions. I began to understand that my passion for reading (I read quickly and have an excellent memory) could be the key asset for my personal development.” Starting in June 2011, Rosenthal gave himself six months to build a solid coding knowledge base, concentrating exclusively on theory.
He bought or borrowed about 20 books on software development. He also implemented a highly disciplined approach: two hours of studying every evening after work, with five additional hours spread over the weekend. What is more, Rosenthal did not go near any computer at the time. “I needed to immerse myself in the coding culture before using a computer, which was the very opposite of the course, where the teaching was based on putting development software in our hands as quickly as possible.”
Rosenthal set about testing his knowledge with frequent visits to online forums and discussions with other developers. After six months, he began to acquire a solid coding base. “I was able to help other members solve their problems even though I had never done coding myself. That was the moment I knew that I had enough theoretical knowledge and that I now had to tackle a computer.” 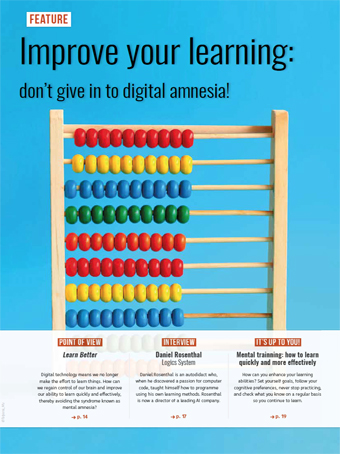 Read the full 3-part feature: “Improve your learning: don’t give in to digital amnesia” with: