Influence and persuasion: a question of timing

Are you aware that it is in the moments immediately before you state your appeals that people largely decide whether they will say yes or no to you? To help you increase your influence, Robert Cialdini explains how to increase your chances of persuasive success in those critical few moments with what he calls the “art of presuasion”!

It’s striking how much we know about the science of influence and persuasion and how little use is made of that knowledge, says Robert Cialdini, one of the world’s leading experts on the science of influence, 30 years after defining the fundamental principles of the science of influence, he announces that, according to recent advances in neuroscience, psychology, and marketing research, the moments before you make an appeal matter enormously to your persuasive success. Whether online or off , to increase your influence with customers, teammates, and bosses – and also to become better equipped to defend yourself against them – learn how to craft the kind of openers shown to get more people to say “yes,” more often.

Channeling attention is easier than changing minds
“Target chuting” is the first opener that Cialdini presents. It’s grounded in positive test strategy, or the powerful human cognitive bias to look for confirmation of ideas rather than disconfirmation. Thanks to positive test strategy, if asked if you’re unhappy with your social life, for example, you are 375% more likely to declare yourself unhappy than if asked if you’re happy. Cialdini expands the positive test strategy into a broader observation of the workings of human attention: people assign greater importance to whatever it is that they are focused on in the moment. From here, he identifies a clear route to persuasive success. In Cialdini’s words, “According to this nontraditional – channeled attention – approach, to get desired action it’s not necessary to alter a person’s beliefs or attitudes or experiences. It’s not necessary to alter anything at all except what’s prominent in that person’s mind at the moment of decision.” For example, to increase your chances of getting customers to agree to share information with you, you can channel their attention to the value of being helpful by first asking: “Do you consider yourself a helpful person?” In a 2009 study, opening with this simple question increased the percentage of people who were willing to respond to a marketer’s survey in a shopping mall from 29% to 77%. Similarly, if you want someone to try out a new product or get on board with a change initiative, a pre-suasive opener could be: “Do you consider yourself to be an adventurous person?”

Designing attention-grabbing cues that boost receptivity
Evolution ensures that the cues that seize your attention most powerfully are the ones linked to your survival. Less obvious is how such cues increase or decrease your chances of persuasive success. Consider the cliché “sex sells.” Yes, it’s true, sex sells, but only what’s bought for sexually related purposes. This includes cosmetics, perfumes, and form-fitting clothing like jeans and swimwear: NOT items like laundry detergent, kitchen appliances, or soft drinks. Cialdini explores the complexities that make attention-grabbing cues highly successful in some influence situations but unsuccessful in others. For example, he considers two contrary human motivations: the motivation to fit in and to stand out. From an evolutionary perspective, these motivations serve different purposes. It makes sense to be part of a group in dangerous circumstances, when threats are near. On the other hand, when seeking a romantic partner, it makes sense to stand out from the group. To test the implications of these insights, he ran a popularity-based advertisement for an art museum (“over 1 million visitors!”) during both a violent and a romantic film. “The results stunned me,” he reports. Among viewers of the violent film, the ad had the effect of “supercharging favorability” toward the museum. Among viewers of the romantic film, however, it had the opposite effect, “deflating their attraction” to the museum. 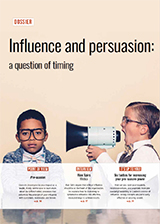