How pride strengthens your leadership: motivation, efficiency, and influence

“Vanity is wanting to appear as though you are something; ambition is wanting to be something; self-regard is believing you are something; and pride is knowing what you are worth” — these words, attributed to the Polish statesman Edward Raczynski, reflect the ambiguity that persists around the concept of pride. Often confused with arrogance or self importance, pride is an emotion that can be used to harness individual and collective motivation. And it is a key component of leadership.

Pride has been a “non-issue” for researchers for many years, notes Jessica Tracy, professor of psychology at the University of British Columbia in Vancouver. Historically, scientists have viewed the emotion as a psychological disposition limited to certain individuals, or as a volatile feeling influenced by environment. After several years spent researching in the US and as far afield as Burkina Faso, however, Tracy demonstrates that pride is a universal emotion, and should be placed alongside the other six basic emotions of happiness, anger, sadness, fear, disgust and surprise. In short, pride is much more than a passing feeling: it is a defining characteristic of human nature. Tracy makes another important point: pride is a particularly useful emotion in a professional context since it acts to boost individual and collective performance.
Instinct for social competition pushes people to surpass themselves…
Tracy argues that pride is a pleasant emotion generated by living up to our self-image and what we see as our place in society. It is a basic need, a competitive instinct that serves to affirm our rank in the social hierarchy. When we are bereft of pride, Tracy explains, we are inclined to go in search of it, a quest that motivates us to forge ahead and even surpass ourselves. Dean Karnazes illustrates this phenomenon to a tee. Californian-born Karnazes was enjoying an evening with friends back in 1992 when he decided to jog home on the spur of the moment. Thirty kilometers later, he arrived safely and was thrilled by what he had achieved. Karnazes has subsequently devoted his life to re-capturing the feelings he experienced that night. He has never stopped running, and has even covered up to 500 km without stopping, earning the nickname the “ultra-marathon man”. There are many people who, like Karnazes, push themselves to their limits so they can match the image they have of themselves. Bill Gates, for instance, spent his teenage years taking electronic components apart and reading encyclopedias so he could become, in his own words, “the man he wanted to be.”
… Without undermining the collective interest
In common with the other basic emotions listed above, pride does not just have a psychological effect; it also has a direct impact on our metabolism. Those archetypal outward signs of pride, even when feigned, (an upright posture, expanded chest and head tilted slightly backwards) act as a testosterone pump. Tracy’s research has established that adopting an attitude of pride results in people taking bolder decisions as well as making them physically stronger and more tolerant to pain.

How pride strengthens your leadership: motivation efficiency, and influence 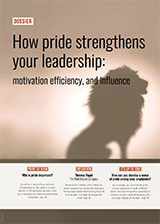 Based on Take Pride, Why the Deadliest Sin Holds the Secret to Human Success by Jessica Tracy (Houghton Mifflin Harcourt, 2016) and an interview with Theresa Vogel, Engagement manager, The Walt Disney Company, Germany (December 2016).