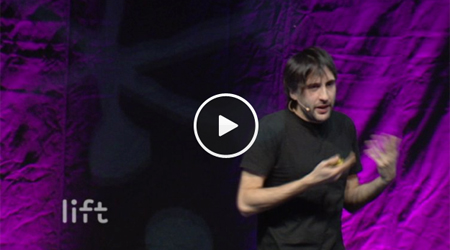 Sebastian Dieguez, a researcher in neuroscience at the University of Fribourg, opposes those who criticize new technologies (The Lift Conference, 2013, 33:04 minutes)

New technologies are often blamed for a variety of ills: intellectual laziness, loss of analytical and systematic thinking skills, narcissism, addiction, and even loneliness. However, Sebastian Dieguez, a neuroscientist at the University of Fribourg, sees little point in censuring the technologies. As products of the human mind, technologies inevitably meet people’s needs: they can’t in themselves constitute threats.

The researcher draws a parallel with writing, which, although it appeared only very recently in the genetic history of mankind, already has an assigned area in our brain (originally dedicated purely to spatial orientation). Various studies, such as the work by Mark Changizi (May 2006), have demonstrated that all writing systems share a basic common structure whose features correspond to elements in the human environment (mountains, dwellings, human figures, etc.). Dieguez infers that the brain used our aptitude for observing and understanding the environment in the invention of writing. Alphabets conform in some way or another to what the brain already perceived in nature, indicating that human beings cannot conceive anything beyond their inherent capabilities.

According to Dieguez, the adaptation to new technologies follows a similar pattern. Thus, how could they be responsible for reducing our intelligence? He also underlines the fact that the ills attributed to new technologies have always existed: nobody waited for the advent of smartphones before forging relationships, engaging in conversations or playing, being narcissistic, or feeling lonely! New technologies, then, are designed to work not against us but with us. It is up us to ignore what we do not find interesting or, on the contrary, to exploit anything that we consider useful.

For advice on how to use the opportunities offered by new technologies with discretion, see our file on “Social Media: From a Fad to Your Own 2.0 Strategy” (Business Digest, October 2011).