Most corporate cultures reward employees who seek to please superiors by agreeing with everything rather than challenging decisions. The problem is that such cultures give rise to organizational stupidity. According to Pontus Bodelsson, CEO of the Swedish media group HD-Sydsvenskan, the solution is to work to instead develop a culture of questioning. 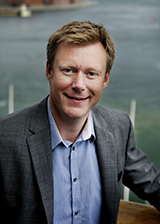 When Pontus Bodelsson took over as CEO of HD-Sydsvenskan in 2015, the media outlet (which distributes five newspapers in Sweden and publishes three news websites) was in a state of flux. Like many others in the industry, HD-Sydsvenskan’s leaders had not recognized the impact of the digital revolution early enough, and the organization’s business model remained unchanged. According to Bodelsson, it seems possible that the firm did not know how to make the most of the collective intelligence of its 400 employees. Arguing that a kind of organizational stupidity had gripped his company, Bodelsson echoes the work of Professor Mats Alvesson. Since 2016, the CEO has been striving to rectify this problem by instead developing a strong questioning culture.

When acting in haste spawns organizational stupidity…
“Professor Mats Alvesson constantly challenges the habits that leaders believe are effective,” says Bodelsson. “His latest book, The Stupidity Paradox, is provocative. It made me reconsider my own practices.” Individuals are naturally equipped with the ability to think, but company cultures and structures can undermine the critical thinking skills of its employees. And periods of constant change, or when the pace is frenetic, or when a business is confronted (for example) by competition from new pure players1 or free access can exacerbate that effect. The crisis in the press industry means that companies are forced to reinvent themselves, with financial difficulties provoking a sense of urgency that leaves little time for careful thinking. “To ensure that a company acts quickly,” says Bodelsson, “we convince ourselves that thinking is a waste of time, and that staff should focus on business objectives”. In this way, firms impede rather than mobilize collective intelligence to unearth new levers for creating value.

… That impedes clear thinking!
Paradoxically, organizational stupidity may even circulate in a media outfit such as HD-Sydsvenskan, which brings together talented journalists with a natural tendency to question authority, because their very job is to ask questions. “We were in such a rush because of the pace of copy deadlines that we didn’t have enough time to think about the impact of the internet,” admits Bodelsson. “We didn’t listen properly to the people who were casting doubt on our business model. If we had listened to them ten years ago, if we’d understood that the internet wasn’t just a new publishing medium but a force for change in the way information is consumed, we would have innovated sooner.” 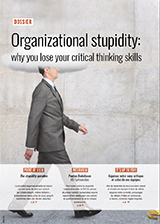