Experience, or How Microsoft Got Back in the Race

How has Satya Nadella, named CEO of Microsoft in 2014, managed to put the software giant back in the innovation race against Apple, Google and Facebook? He’s done it by focusing on the experience of customers, followed closely behind by employee experience and the rest of Microsoft’s stakeholders.

Since the end of the 2000s, Microsoft has been falling behind Google, Apple, Facebook and Amazon. Younger, more innovative, and more agile, these other players are the new drivers of the IT industry. For one thing, Microsoft failed to develop mobile, cloud and artificial intelligence in time. The company is still financially healthy thanks to its quasi monopoly on operating systems for PC (the group reported $22 billion in profits in 2013), but this advantage may not last. The desktop computer market is running out of steam, and Microsoft’s revenues grew by only 6% in 2013 (compared to 15% the previous year), while each of its competitors reported double-digit growth. Two years after his arrival, however, Satya Nadella seems to have put the company back on the map. His approach is to put experience – customer experience, primarily, but also that of employees – at the core of Microsoft’s strategy.

Putting users before technology
After having been the undisputed leader of the computer world for more than 20 years, Microsoft did not see the mobile revolution coming, which has massively benefitted both Apple and Google. When named the head of the company to replace Steve Ballmer, Satya Nadella experienced some growing pains. Despite the $7 billion acquisition of Nokia’s mobile division in 2013, Microsoft still failed to win over the mobile market. With its operating system geared towards laptops, the Windows Phone is a great failure when compared with the technologies of Apple and Google. Microsoft was even forced to lay off 12,000 employees following the acquisition of Nokia. Satya Nadella, who has worked at Microsoft for 20 years, is now starting to analyze what isn’t working. He is leading an in-house team of anthropologists (Microsoft is the second largest employer of anthropologists in the world after the US government) and has learned that for two decades Microsoft has been betting on technology while neglecting user experience.

Simplifying the user experience
Satya Nadella’s objective is therefore to streamline customer experience. Whether you are on a tablet, Smartphone or PC, whether you are using a Mac, a Windows Phone or an Android tablet, you need to be able to access your data in the same way. Hence the birth of Windows 10 in July 2015, the first version of the operating system that is common to all platforms. 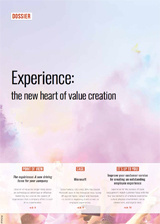 Based on L’expérience : le nouveau moteur de l’entreprise, by Christophe Rebours and Inès Pauly (Diateino, October 2016); “Why the Millions We Spend on Employee Engagement Buy Us So Little” by Jacob Morgan (Harvard Business Review, March 2017); “How Satya Nadella is making Microsoft cool again, and taking on Apple and Amazon” by Paul Smith (Financial Review, November 2016).