We all want to commit to something, to achieve something that is expressed both through the action itself and over time. But often we come up against a self-built wall: we don’t have an idea, we don’t have the means, we don’t have the time, and, right now, we have low visibility. Duckworth counters all that with a very simple conviction: effort counts for twice as much as talent. And the level of effort you put into a task depends on what she describes as grit, “having the passion to accomplish a particular top-level goal and the perseverance to follow through.”

If Duckworth’s psychology of success arguably at points lacks nuance, she still provides a compelling argument against our well-documented, though unconscious, and seemingly irrational human preference for natural talent over effort. In other words, she provides an inspiring, practical reminder that: “Our potential is one thing. What we do with it is quite another.”

Determination, the cornerstone of commitment

According to Duckworth, the world’s most extraordinarily high-achieving individuals all share a trait that she calls grit, or the “passion and perseverance” to strive relentlessly day in and day out, often in the face of great difficulty and failure, to achieve a goal. “In sum, no matter the domain, the highly successful had a kind of ferocious determination that played out in two ways. First, these exemplars were unusually resilient and hardworking. Second, they knew in a very, very deep way what they wanted. They not only had determination, they had direction. It was this combination of passion and perseverance that made high achievers special. In a word, they had grit.”

So what does this mean for you? Start from the idea that grit is a character trait like any other, that it can be nurtured and developed as long as you understand its four key elements: interest, practice, purpose, and hope.

#1 Interest: identify what excites you and foster a passion

What motivates you to get up in the morning isn’t always clear, and it can change over time. “When I first started interviewing grit paragons, I assumed they’d all have stories about the singular moment when, suddenly, they’d discovered their God-given passions,” writes Duckworth.

In fact, however, she found that “grit paragons” rarely came by their passions in a mysterious, passive way. On the contrary, they all describe working actively and intensely for years to identify and develop them, by, for example, finding mentors.

What’s more, they often had to try out multiple different interests before finding the one that ended up becoming their passion. As she explains, “(Most highly successful people) spent years exploring several different interests, and the one that eventually came to occupy all of their waking (and some sleeping) thoughts wasn’t recognizably their life’s destiny on first acquaintance.” So there’s no point waiting for passion to hit you over the head. You may be better off trying out several things that might interest you.

3 ideas to help you maintain your perseverance

Maintaining your grit, even in crisis 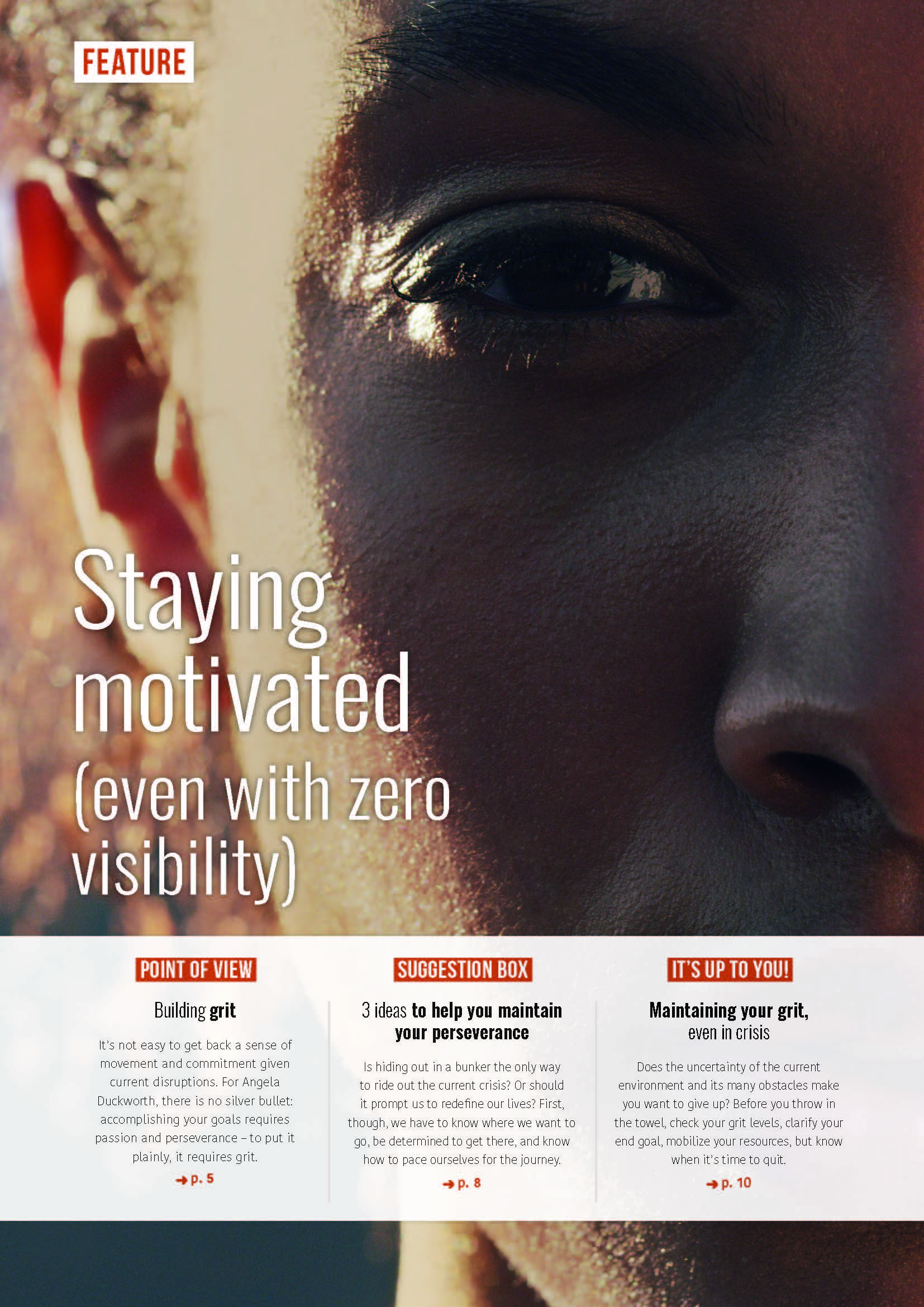 Subscribe
Tagged with : motivation, passion, grit, perseverance, determination., commitment, idea
Share this post
Tweet
Published by Françoise Tollet
After receiving a degree in agronomy from AgroParisTech and a Masters in Business Administration from HEC in Paris, she spent 12 years in the food industry (cotton, palm oil, and tobacco), first as a consultant, and then, via her strong understanding of how to lead complex investment projects in emerging countries, as the director of development with the Bolloré group. She has run Business Digest since 1998, a company that she co-founded in 1992. And she took the Internet plunge by 1996… even before coming on board as part of the BD team.

Don’t give up! Why Grit counts as much as talent
How to test your grit – and then increase it
The power of grit at ThunderCat Technology
Previous
Next