Agility: is hacking your company the answer? Premium

The term “corporate hacking” covers a range of tactics and measures used to spread intrapreneurial practices, improvisation and iterative learning like viruses within companies. The aim of corporate hacking is to fuel more agile, open and collaborative environments – in other words, to create cultures that stimulate innovation and make work more meaningful again.

Corporations will try anything to infuse their staff with dynamism and boost performance. They will launch excessive transformation plans, create insulated innovation departments, and import gimmicks and gadgets from start-ups — but their efforts often turn out to be in vain. Management-led change initiatives seem prone to being ineffective, failing to generate any fundamental shift in corporate cultures. Notably, in spite of their best efforts, most management struggles in the face of today’s demands for reactivity, agility and creativity. Co-authors Bacquere and Viguié argue that, rather than management, it is employees who are in position to drive change effectively, to subvert the larger system and forge new cultures built on creative freedom, improvisation, cooperation and innovation.

A philosophy based on subversion
Corporate hacking comes down to individual employees who have the skills to take action and become “intrapreneurs.” Such employees, aka corporate hackers, take on projects that are meaningful to them, even if they must bypass established processes or hierarchies to do so. A good example of corporate hacking can be seen at Salomon, the sports equipment manufacturer, where project manager Frédéric Crétinon designed an innovative trail shoe with optimal stability in the early 2000s, at a time when other manufacturers were still focusing on the shock-absorbing capacity of their models. When Adidas bought Salomon in 2002, the project was dropped after the idea was vetoed by market research. But Crétinon found a way around the problem: he organized a full-scale trial, kitting out some athletes with his prototype to test it in the fi eld. Even after those tests were clear successes, Adidas still refused to budge. In response, Crétinon stuck things out and devised a second work-around: he put several highly attractive models of his shoe on display in the hallway next to his office, where they caught everyone’s attention and aroused curiosity and envy. Talk spread within the company all the way up to the CEO, who responded by testing the shoes with the management team… who were wowed by the innovation and lifted the ban! 15 years after going on the market, the “underground” shoes have become one of Salomon’s greatest successes. This exemplary tale is all down to the obstinacy of one man. The question is: how can you cultivate the same kind of commitment and determination throughout an entire company?

Making new work practices go viral
To encourage work practices that are more open, innovative and creative, it may be useful to hack a particular project in the hope that it will trigger a snowball effect. The challenge is to choose a short assignment – a few months maximum – with a big impact that is likely to produce tangible, exciting results that will quickly be visible.

Agility: is hacking your company the answer? 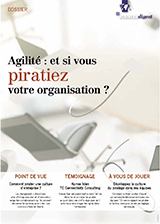 The five principles of corporate hacking
How global is your company?
How to spread excellence in your company
Participate in a survey on the use of…
Previous
Next