What it takes to develop performers Premium

To empower the talent and skills development of your teams, why not try out the specific strategies of the world’s most renowned talent developers – people who have demonstrated a consistent, rare ability to hire and hone talent into top performers.

The fast pace of change today renders skillsets obsolete at unprecedented speeds. Formal talent and skills development programs simply can’t fill the gap on their own. Staying up-to-date today takes constant on-the-job, on-the-fly learning. So what is your role as a manager and leader in helping your teams to hone their skills on-the-job? In his 2016 book, Sydney Finkelstein, Director of Tuck’s Center for Leadership, presents the findings of his study of 50 of the world’s most renowned talent developers, or “superbosses” as he calls them. Identified based on the percentage of their staff that went on to become top-performing industry leaders after working for or with them, these leaders, he writes, “didn’t just build organizations; they spotted, trained, and developed a future of generation of leaders.” And they did so through the following daily leadership attitudes, strategies, and behaviors.

Throwing out the HR checklist
Surprisingly – and to the horror of your typical HR specialist – superbosses refuse to select talent based on traditional standards like education and experience. Why? They all share a relentless drive to find exceptional people for their teams, and a checklist approach to recruitment (the “right” schools, “right” experiences, and so on) can exclude many of the most creative and flexible talent, who often tend to choose unconventional career paths. Rather than diplomas and titles, superbosses base their recruitment decisions on how candidates think, which they observe for themselves via in-depth discussion. Superboss Larry Ellison, co-founder and former CEO of the software giant, Oracle Corporation, reports preferring a candidate precisely because he had dropped out of college, which Larry thought showed an admirable “independence” of mind. In other words, superbosses don’t want cookie-cutter teams: they want people who shake them – and their organizations – up. According to Finkelstein, “Somewhat surprisingly, superbosses in technology-based industries — where employees must meet exacting standards — are just as fond of recruiting employees with unconventional qualifications as superbosses in more creative industries.”

Hunting out stretch opportunities for your staff
After hiring, superbosses then push their team members to exercise the intelligence, creativity, and flexibility for which they have been chosen. This starts from day one, when superbosses encourage people to invent their jobs for themselves, rather than adhere to pre-defined, clearly delineated roles. For example, “At Industrial Light & Magic, George Lucas’s employees didn’t even have job descriptions. They were assigned tasks on various projects according to what was needed and who was available.” In other words, superbosses foster onthe-job learning by constantly entrusting team members with new challenges and responsibilities. “They are constantly on the hunt for new business opportunities but also for new opportunities to stretch their staff.”

What it takes to develop performers 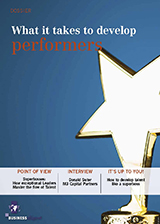 Based on ”Superbosses: How Exceptional Leaders Master the Flow of Talent” by Sydney Finkelstein (Portfolio, february 2016) and an interview with Donald Suter, Managing Principal and CEO, M3 Capital Partners, August 2016.

Tagged with : efficiency, career management, team, mentoring, skills, talent
Share this post
Tweet
Published by Caroline Schuurman
Caroline is our editor-in-chief. She play a key role in shaping our editorial strategy, keeping a sharp eye on business research, publications, and trends and interviewing business experts and leaders from around the world.

Sydney Finkelstein: What It Takes to Be a…
Are your top performers truly engaged?
Develop your influence – Do not…
How to develop (true) global leaders
Previous
Next