The global business environment is undergoing constant change, as evidenced by evolving management methods, financial pressure, digital transformation, new players who challenge old business models, and so on. The result is increased pressure on employees, which in turn increases the risk of interpersonal conflicts. When tensions arise, people often think the solution is as simple as identifying and neutralizing any toxic individuals who are undermining the morale of others. But, in fact, managing interpersonal conflicts tends to be far more complicated than that…

For 84% of employees, interpersonal relationships are the cornerstone of wellbeing at work. The problem is that an equal percentage (85 %) say they face interpersonal conflicts within their company, and almost one in three find these conflicts require constant management. Individuals lose on average more than seven hours per month to dealing with interpersonal tensions. In addition to the waste of time and energy, such tensions have other indirect costs: diminished commitment, absenteeism, turnover, damage to the company’s reputation, brain drain, stalled decision-making processes, and so on. What is the solution? It starts with understanding that the true origin of conflicts is rarely the toxic nature of employees, but rather behaviors that are fostered by organizational dysfunctions.

Is hell other people?
An expert in leadership, Cy Wakeman conducted an 18 month-long survey in the United States of several companies that had reported situations of conflict. Almost 100% of the individuals that he interviewed believed that the primary cause of tension resided within the individuals themselves. Some were afflicted with irreparable psychological issues (narcissism, passive-aggression, paranoia, manipulativeness, and other problems). The conventional wisdom is that such individuals should be identified and neutralized (or eliminated) from the company. This ultra-simplistic approach has become very popular among observers within the world of business and has fed the development of an abundance of literature on the toxicity of certain individuals. Yet, this hyper-presence of “the toxic individual” in the media overlooks the fact that interpersonal conflicts, for the most part, have multiple causes and that individual behaviors tend to be merely symptoms of bigger problems.

The real reasons for interpersonal conflicts
The majority of toxic work environments are the result of dysfunctions, not an inherent toxicity on the part of individuals. Such dysfunctions can be organizational (poorly defi ned objectives and/ or roles, disagreement on methods or priorities, closed reporting systems, etc.), or cultural (the cult of performance, impermeable information silos, etc.), or related to personnel (inadequate skills, mismatched teams, managers who are either withdrawn or overbearing). The list of things likely to “rot” relationships between employees is long. And, in recent years, the phenomenon has been exacerbated by the challenging of traditional corporate codes, which has yielded a number of paradoxical directives: the promotion of personal initiative vs. the holding on to rigid processes; the need for strategic agility vs. intense performance pressures; diversity and the volatility of teams vs. greater demands for collaboration, and so on. Employees operate in a climate of “conflict-generating” uncertainty. 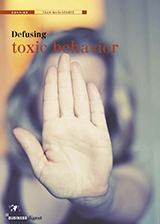 Based on “How To Manage Conflict” by Kristi Hedges (Forbes 2015); “3 Ways To Stop Yourself From Being Passive-Aggressive” by Peter Bregman (Forbes 2015); “The No. 1 Source Of Workplace Conflict, And How To Avoid It” by Cy Wakeman (Forbes 2015); “How to Deal with a Mean Colleague” by Amy Gallo (Harvard Business Review , 2014); Toxic Management by Patrick Collignon and Chantal Vander Vorst (Eyrolles, 2012) and an interview with David Edelmann , Marketing Director at Denien GmbH (June 2016).