Why are stylish eyeglasses so expensive? This is the question that led to the founding in 2010 of Warby Parker, an American eyewear company that is among the first to sell eyeglasses directly to consumers online at a fraction of the price of brick-and-mortar retailers. Warby Parker’s original, game-changing approach achieved a meteoric rise, disrupting an entire industry.

In 2010, four Wharton School MBA students co-founded Warby Parker, becoming among the first to sell stylish prescription eyewear directly to consumers online. At $95 per frame, which includes prescription lenses, shipping, and a donation pair to those in need, Warby Parker’s stylish glasses cost a fraction of the prices charged by other retailers. The quality of their product and significantly lower prices in combination with an ingenious brand strategy (Adam Grant describes Warby Parker as “one of the most fashionable brands in the world”) has enabled the startup to disrupt the entire American designer eyewear industry. Today, the six-year-old company is a juggernaut, and one of only a handful of online startups to grow beyond a $1 billion valuation before going public or getting acquired. How did they do it? The successful originality of Warby Parker comes from the co-founders initial questioning of the default system in place; their bringing together both depth and diversity of experience; strong, careful execution that makes use of the power of collective genius; and finally a masterful sense of timing.Questioning the default system
In 2008, David Gilboa forgot a $700 pair of designer glasses in the seat-back of an airplane. Recently enrolled as a full-time MBA student at the Wharton School, Gilboa was so upset over the expense that he decided to remain glasses-less for his entire first term rather than pay to replace them “I’d just bought the iPhone for $200 and it did all these magical things that people wouldn’t have believed even a few years earlier,” Gilboa says. “Meanwhile, a pair of glasses: The technology has been around for 800 years. It didn’t make sense that I was going to have pay that much for a new pair of glasses.” When Gilboa complained to his study-group partner Andrew Hunt (whose glasses at the time were held together by tape), an idea began to form. “We started talking about why glasses were so expensive,” says Gilboa. “Then we learned a little about Luxottica.” Luxottica is an Italian giant that controls over 80% of the American eyewear market, with revenues of $9 billion a year. “Understanding that the same company owned Lenscrafters and Pearle Vision, Ray-Bay and Oakley, and the licenses for Chanel and Prada prescription frames and sunglasses – all of a sudden, it made sense to me why glasses were so expensive,” Gilboa says. “Nothing in the cost of goods justified the price.” Realizing that one monopolistic company was charging unnecessarily high prices encouraged Gilboa and Hunt to consider the options for a better alternative.

The surprisingly ordinary path to originality 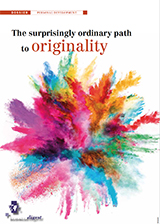 Based on Originals: How Non-Conformists Move the World, by Adam Grant (Viking Press, February 2016) and “Warby Parker Sees the Future of Retail: For building the first great made-on-the-Internet brand” by Max Chafkin (Fast Company, 17 February 2015).

Tagged with : innovation, strategy, personal development, originality, passion
Share this post
Tweet
Published by Caroline Schuurman
Caroline is our editor-in-chief. She play a key role in shaping our editorial strategy, keeping a sharp eye on business research, publications, and trends and interviewing business experts and leaders from around the world.

The surprisingly ordinary path to originality
Loss of meaning, loss of passion = brown-out
Your strategy needs a strategy: How to…
Digital strategy, listening leaders and…
Previous
Next