Is hell (really) other people?

“A wise man is above all the insults that may be said to him, and the great response that one must make to outrages is moderation and patience,” wrote Molière. A precept that is often difficult to keep up in the sometimes tense atmosphere of the workplace. And yet, David Pollay emphasizes, strategically the management of those he calls “garbage trucks” individuals who are charged with negative energy that they unload on others, thus affecting collective performance— is very important.

In 2007, Robert Sutton called them “assholes”; in 2011, David Pollay prefers to call them “garbage trucks.” These are the “harmful” folks who seem to take a perverse pleasure in dumping their frustrations, anxieties, and anger on everyone around them. There are a lot of them around! Indeed, according to a study by Christine Pearson and Christine Porath, 96 percent of individuals say that they have been the victims of incivility at the workplace, half of them more than once a week, and almost two out of three people suffer pathological stress due to acts of incivility. The problem is not just moral, it is also economic: the impact of garbage trucks on employee engagement is totally negative. According to Pearson and Porath, American companies lose 300 million dollars a year in this way. Cisco Systems alone has estimated its annual lost revenue due to incivility at 8 million dollars! But garbage trucks can be avoided. Each person can fight against their harmful effects in their own way … and avoid becoming one themselves.

To update on this subject, take the quizz Is hell (really) other people?

Inspired by our work as an observatory and collaborations with experts and authors, these quizzes are designed to provoke reflection and discussion (rather than to serve as formal self-assessment tools). In eight short questions, rouse yourself to think more deeply about subjects that, perhaps, you hadn’t even thought to wonder about before! 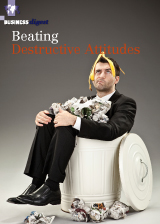 Based on ”The Law of the Garbage Truck, ”by David J. Pollay, Sterling, October 2010, and an interview with Robert Aliota, founder and CEO of Carolina Seal, Inc. U.S.A., May 2011.

Copy, copy, copy: How to do smarter…
[Quiz] Resolve to start the year off right…
Playing to Win: How Strategy Really Works
Do you (really) ask questions?
Previous
Next