Is “corporate liberation” merely a new trend that will trigger yet another flurry of reorganizations? No, the phenomenon is set to last, if we are to believe some of the leaders who have taken this path. The liberated approach isn’t revolutionary. It is simply part of a wave of transformations that began several years ago with the aim of developing agility by capitalizing on shared leadership.

Do you work in a company where initiatives are strangled by bureaucracy? Where managers are overwhelmed with having to report on their tasks, collective intelligence is reduced by warring egos, and creativity smothered by lack of autonomy? What if you could throw off such shackles? This is the promise made by Isaac Getz in his bestselling book on liberated companies, Freedom, Inc. Getz’s core belief is simple: an engaged, self-reliant employee is a happy employee who will boost corporate performance. “Pure fantasy!” holler Getz’s critics, who accuse the author of conjuring up a “care bear” company where everyone loves everyone else and feels responsible for collective success. A liberated ethos is not a new, revolutionary style of management that has appeared out of the blue – nor is it a miracle method for ensuring everyone flourishes and excels at work. Corporate liberation is part of a natural (and slow-burning) evolution in management methods that give greater autonomy and responsibility to the people who work closest to value creation. While the media uses the generic term “liberated company”, it could just as easily be referred to as “inverted organizational pyramid” (HCL Technologies), “self-management” (Morning Star), “self-directed teams” (WL Gore) or “trust-based management” (Semco). Beyond the hype, the key feature is that leaders can pick and choose from a number of good ideas to promote agility — without having to sign up to the whole package.

WHAT IS A LIBERATED COMPANY?

Liberate your company to make it more agile
The limits of hierarchical management, with its one-way top-down structure, have been discussed for years. “This model [with its roots in Taylorism] worked to control costs but is now too rigid for an ever-changing world,” claims Getz. “Lack of agility and responsiveness together with the failure to mobilize every ounce of intelligence that is needed to pick up on faint signals are obstacles to real-time solutions, which put your organization’s survival at risk. It’s precisely in the context of a crisis that the liberated company model has generated the most interest.” Many firms have embarked on the transformation process because they have reached the end of the traditional bureaucratic approach: a committee of experts sitting at the top of the pyramid, handing out orders with overlong deadlines and a fatal lack of local knowledge.

Free up autonomy: encourage a common goal and commitment
Unlike in more conventional organizations, most employees in liberated companies are free to choose what actions to take in the best interests of the firm; in other words, they are not coerced by decision-makers or constrained by procedures. They act for the good of the company and not out of obedience to their bosses or to implement processes. The result is two-fold: they are fully committed to delivering the business’s strategic vision and enjoy enough autonomy to innovate ad infinitum. As a result, the company becomes more agile and efficient.

Managing a liberated company
Karine Flacelière, a professional coach who guides firms through the liberation procedure, explains: “Managers aren’t squeezed out of liberated companies. But instead of spending all their time on largely unfulfilling reporting tasks, they focus on their primary mission: 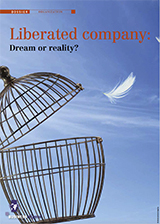 Based on Freedom, Inc.: Free Your Employees by Isaac Getz and Brian M. Carney (Crown Business, 2009); “Créer une performance durable” by Christine Porath and Gretchen Spreitzer (Harvard Business Review , November 2015); and Reinventing Organizations by Frédéric Laloux (Nelson Parker, 2014), an interview with Alexander Gerard, head of the inov- On group and CEO of CHRONO Flex and an interview with Chrystèle Verfaille, head of digital acculturation, BNP Paribas.

How global is your company?
How to spread excellence in your company
The Dengue Vaccine Company: an agile team of teams
Participate in a survey on the use of…
Previous
Next