How tapping into collective intelligence promotes employee engagement at Covéa

What role do leaders play in facilitating collective intelligence? How can they ensure that the intelligence produces initiatives that all employees will embrace? These are just two of the questions we put to Mithra Sarrafi, head of Covéa’s university, who organizes regular collaborative workshops.

As head of the Covéa Campus, Mithra Sarrafi leads a team with a collective intelligence mindset that aims to boost the sense of corporate pride felt by Covéa’s 22,000 employees. Covéa Campus uses real and virtual communities (via the Corus social network) as a rallying point for volunteers to devise and test crosscutting initiatives for all Covéa’s brands. Sarrafi is ideally placed to observe how collective intelligence forms and how group decisions are implemented.

Collective intelligence as an aid to decision-making
“We can distinguish two types of decisions where collective intelligence plays a key role,” says Sarrafi. “Strategic decisions taken by a leader to set out the vision: the why. And operational decisions: the how.” Leveraging collective intelligence does not have the same goal in the two cases. For strategic decisions, collective intelligence serves mainly to ensure the best possible representation of the environment so that an informed decision can be taken. For example, a leader who is open to ideas from his or her employees, partners and competitors will have a broader and more accurate outlook in a given situation. Because, as Sarrafi explains, “There is no such thing as a single reality; it’s like a mirror ball, and the decision-maker just has to try to discover as many facets as possible of the reality.” In contrast, for operational decisions, the group’s input is not so much about making the right decision as helping the collective own an idea and thus stimulating engagement by involving it in the process.

What kind of leadership can reduce the risk of “group think”?
In both the above scenarios, if the collective intelligence is manipulative, it will not achieve any results (if everyone is asked his or her opinion but the leaders ignore the responses). And the same is true if the intelligence is poorly implemented: everyone will go along with the dominant view, i.e., agree with the person who is most at ease in the group or who has official authority. Managers play a decisive role in avoiding these pitfalls, and they must demonstrate the following qualities…

Overcoming the obstacles to collective intelligence 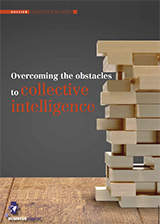 Based on Wiser: Getting Beyond Groupthink to Make Groups Smarter by Cass R. Sunstein and Reid Hastie (Harvard Business Review Press, December 2014) and an interview with Mithra Sarrafi, MD human resources and internal communications, and director of the Covéa Campus.

Tagged with : performance, collaboration, leadership, decision-making, engagement, collective intelligence, management, team
Share this post
Tweet
Published by Caroline Schuurman
Caroline is our editor-in-chief. She play a key role in shaping our editorial strategy, keeping a sharp eye on business research, publications, and trends and interviewing business experts and leaders from around the world.

What factors into employee wellbeing?
Dare to be messy: tapping an unrecognized…
Collective intelligence also needs “invisibles”
Overcoming the obstacles to collective…
Previous
Next