Staples prepares for the future of work

Régis Mulot – HR director at Staples, the world’s leading provider of office supplies and equipment – is already thinking about the challenges posed by the emergence of new ways of working. The critical issue facing the companies of tomorrow is how to provide a “platform” (above and beyond traditional wage labor) for harvesting ideas, skills and technologies in the outside world while saving on overheads.

For millions of Americans and Canadians, the name Staples brings to mind the start of the new academic year and school sup¬plies. It is not widely known, however, that Staples is actually the fourth largest e-com¬merce player in the US behind Amazon, Apple and Walmart. “This strong online presence,” explains Mulot, “is the result of continuous investment since the 1990s and the ongoing expansion of our network of stores. We implemented a paradigm shift in 2012 when we created a marketplace that sells third-party products, meaning we can now offer 1.5 million items for sale compared with 33,000 in the past.” But there are new challenges ahead. As Mulot points out, “the first challenge is to carry on competing with our rivals even though they have resources, in terms of technological investment and financial indicators, that are different to ours (especially Amazon). The second challenge is to bring cultures as diverse as traditional and digital commerce under the same omnichannel umbrella. Lastly, our third area of concern is having access to the skills we need in a labor market that is changing radically.”

The end of the integrated business model
Staples’ future will require the company to transform itself into a “platform” business, a concept originated by Eric Schmidt, chairman of Google, in How Google Works1: “Roughly speaking, the mechanisms for creating value over the past 200 years have not changed. They have always been based on organizing labor and capital as efficiently as possible inside a company. But this closed model has now lost much of its relevance.” The most successful organizations, according to Mulot, have the ability to open up and…

The future of work 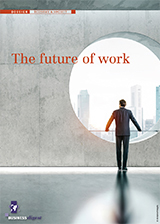 [Interview] Resilient leadership at…
Our selection of five not-to-miss articles…
What will work look like in the future?
The Year Without Pants: WordPress.com and…
Previous
Next