Team of teams: New rules of engagement for a complex world

Efficiency — once the advantage of large organizations over smaller — is no longer enough for navigating today’s level of complexity and speed of change. A solution for “leviathans” in need of the agility hitherto limited to less structured players is to build “a team of teams.”

The ability to transmit information instantly and at virtually no cost has led to a vastly more interdependent, fast-paced, complex and unpredictable world. General Stanley McChrystal faced these new twenty-first century realities when he led America’s most elite military organization, the Joint Special Operations Task Force, into the midst of war against Al Qaeda in Iraq in the spring of 2003. In his words, the enemy was “poorly trained and under-resourced” and the greater resilience and flexibility of the networked organization enabled them to stay always one step ahead. According to him, the problem was his organization’s approach to management, which was based on the theory of “scientific management.” Designed for “highly efficient execution of known, repeatable processes at scale,” this system slowed McChrystal’s organization down in an environment characterized by extreme uncertainty. In response, he set out to scale up the adaptability and agility of smaller teams by building a “team of teams.” This approach has since been adopted by a number of companies and involves:

• Setting the goal: the entire force needed to share a fundamental, holistic understanding of the operating environment and of our own organization, and also needed to preserve each team’s distinct skill sets.

• New leadership is more important than ever. The leader can’t be the “all-knowing decision makers” anymore. Now leaders are the ones who create the conditions that unleash the collective intelligence of the organization as a whole.

Read the complete dossier
Based on Team of teams: New rules of engagement for a complex world by Stanley McChrystal with Tantum Collins, David Silverman and Chris Fussell (Portfolio / Penguin, May 2015); “Successful teams need two things. One is trust” by Karl Moore (The Globe and Mail, March 2015) and the interview with Guillaume Leroy, Vice Président, Dengue Company, Sanofi Pasteur. 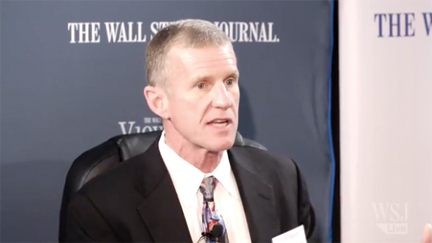 General Stanely McChrystal discusses his “team of teams” concept with John Bussey, Associate Editor at the Wall Street Journal, explaining the key traits of the world’s best teams and the challenge of scaling up those traits within a large organization.

Tagged with : agility, performance, collaboration, teams
Share this post
Tweet
Published by Caroline Schuurman
Caroline is our editor-in-chief. She play a key role in shaping our editorial strategy, keeping a sharp eye on business research, publications, and trends and interviewing business experts and leaders from around the world.

Six simple rules for a more fluid organization
The Dengue Vaccine Company: an agile team of teams
Turnaround: Third World Lessons For First…
A sense of progress: Important source of…
Previous
Next