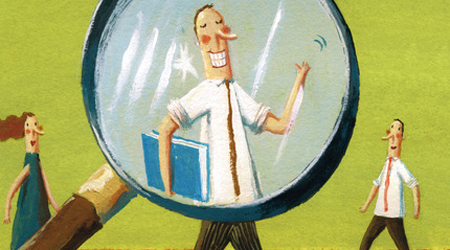 Why we chose this book?
By focusing on the political games inherent to business life, author Laurence Bourgeois has shined the spotlight on a major taboo. Yes, people who are merely “average” can have brilliant careers if they figure out how to make themselves look good! And the opposite also holds. How many brilliant people remain forever in the shadows because they are unable to navigate smoothly in their company’s social waters?

How can you pursue your ambition without making enemies? Think for yourself while acting for the good of the group? Make a splash but not waves? In 13 trucs infaillibles pour être bien vu en entreprise (13 foolproof tricks for looking good at work), author Laurence Bourgeois responds to these questions. The golden rule: sell yourself. Indeed, according to Bourgeois, being the best is not enough; you have to step into the spotlight and show off your work. Just as packaging can make the difference between two similar products, the image that you project is a fundamental component of your reputation. It might involve smiling to convey your commitment, or making a habit of using positive vocabulary. Another requisite: transparency. Bourgeois recommends being straightforward at all times and to err on the side of modesty, admitting to problems and mistakes. Bosses much prefer people who are humble to know-it-alls. So make suggestions instead of proffering advice to avoid appearing as if you wanted to push another person aside and take his/her place. Bourgeois has drawn on fifteen years’ experience in corporate human resources to deliver a manual for boosting your career.