Mission in a Bottle: The Honest Guide to Doing Business Differently – and Succeeding 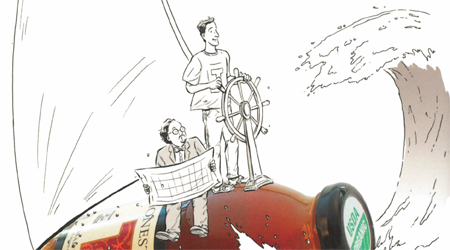 Why we chose this book?
This story is told in a fun way, as a comic book, which is a refreshing change from the standard way of presenting case studies. It will convince managers that the pursuit of profit is not necessarily incompatible with a desire to promote the common good.

Entrepreneurs Seth Goldman and Barry Nalebuff have created a graphic book to tell the story of Honest Tea, the socially responsible company they created in 1998. Find out how, in the early 2000s, the business partners undertook and succeeded in the perilous feat of imposing their brand of ethical tea on a market dominated by food industry giants. Their success has been directly linked to their determination to have a positive social impact (through a high quality product and environmentally friendly sourcing of raw materials) without sacrificing the profit orientation necessary to ensure business survival. After just one year, Honest Tea (Barack Obama’s favorite beverage) was already generating over $1 million in revenue, and this figure has now reached $100 million annually. Indicating Honest Tea’s solid appeal, Coca-Cola purchased the firm in 2011 as a means to enter the ethical beverage market.

Mission in a Bottle: The Honest Guide to Doing Business Differently – and Succeeding by Seth Goldman and Barry Nalebuff (Crown Business, September 2013).

Why should capitalism be “conscious”?

Watch the video:
Can Big Business Fix the World?

Can big business be our ally in solving some of the world’s most intractable challenges? Jon Miller and Lucy Parker visit the RSA to present a new framework of how and where big business can contribute to key global conversations, and in a positive and meaningful way.

Succeeding at digital transformation
How to have presence: a user’s guide
Green Efficiency: Integrating the…
Sustainable Frontiers: Unlocking Change…
Previous
Next