How ordinary citizens are creating a different world 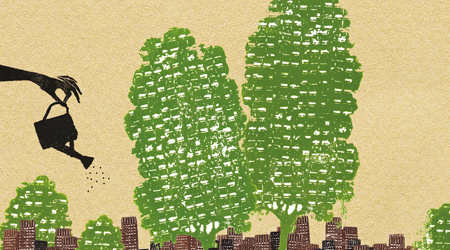 Cooperative housing, micro health insurance schemes, repair workshops run by ordinary citizens, green energy cooperatives, exchanging goods and services… what if the solutions to the current crisis are not to be found in the world of business and do not involve paying for things? Large numbers of citizens are breaking loose from hyper-consumption and turning their backs on the political arena. They are organizing themselves on a local basis to try and solve everyday problems – unemployment, the housing crisis and malnutrition – together.

Collaborative consumption: from “always wanting more” to “less is best”
Whilst the emerging countries are entering the age of mass consumption, industrialized societies are taking a step back from the all-embracing market. From now on, it is no longer owning something that is important but the way it is used. Why bother buying a drill, for example, if you are only going to use it once or twice a year? Consumers are becoming thoughtful participants who are deciding how to use objects: they are turning alternately into sellers, lenders, co-producers, purchasers and renters – all thanks to the community platforms that are spreading across the web.

Green energy: on the road to local self-sufficiency
Better energy management would not only make it possible to improve the lives of thousands of people but also slow down the degradation of the environment. This realization has resulted in a heightened awareness in civil society, which is striving to lead the way by fomenting a series of small energy revolutions here and there with the limited means available. In India, for example, the Barefoot College is an eco-village where the women are learning to harness renewable energies. It will then be up to them to pass on what they learn to the other women in their community.

Health: self-managed medical centers
Some citizens, convinced that access to health is a universal right, are directing their energies to setting up non-profit care facilities, especially in the emerging countries and the United States, where social welfare is almost non-existent. In the States, the Ithaca Health Alliance is only able to operate thanks to donations of money and time from people who also provide furniture and equipment. Volunteer care-givers are also specially trained to give free consultations.

All these initiatives form part of the principle of the distributed economy that is shaking up businesses worldwide. This is a trend that Business Digest has been monitoring for several years: in March 2011 we devoted a dossier to collaborative consumption, whilst in late 2012 the work of Jeremy Rifkin on green energy and Chris Anderson’s work on Makers prompted us to dedicate a dossier to the participative economy, the next great industrial revolution.

Are You in Touch with Your Customers?

Based on What’s Mine is Yours by Rachel Botsman and Roo Rogers, HarperCollins, September 2010 and on the article, “Brand ‘We’” by Rachel Botsman, AFR BOSS, 2010, and the interview with Vinay Gupta, co-founder of WhipCar, and the case of Nike+ & NIKEiD, February 2011.
Business Digest nº 214, march 2011

Are you ready for the third industrial revolution?

Watch the video
Bunker Roy: Learn from a barefoot movement

Bunker Roy, the founder of Barefoot College, tells us how his NGO came into being and how it now operates.