Habits may determine a considerable part of our everyday behavior, but it’s not impossible to change them. By identifying and deciphering your daily rituals and conditioned reflexes, you can learn to control them. It’s possible to change your habits to become more effective as well as inspiring the desired changes in behavior in your teams! 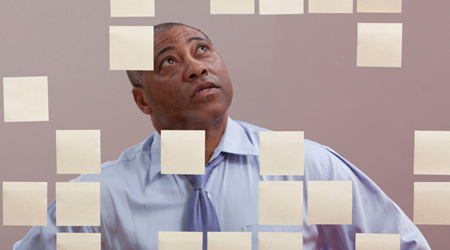 1. None of us can escape our habits: individuals are subject to many types of automatic behaviors, which are the consequence of routine (such as constantly checking your email) and pleasure derived from past experience (to switch off your busy brain). The same goes for the organizations governed by informal rules that are applied without anyone knowing exactly why (such as systematic weekly meetings). The catch is that these reflexes sometimes result in mistakes or create deadlock when there is a real need for change.

2. Take control of your habits: Everyone can acquire new habits or change them. In order to do this, you must understand how your habits operate. For example, if you cannot resist the appeal of sugar, is it because you are hungry or because you use snack breaks as a way to fit in a little much-needed socializing? Once you have figured out these mechanisms, all you have to do is replace them by inserting an alternative (a sugar-free chewing-gum instead of a chocolate bar) and/or changing the routine (by taking a break with a colleague as a way of unwinding at the end of the day).

3. Capitalizing on the power of collective change: As habits are systemic, it’s necessary to take a systemic look at the life of the organization and what governs it, with the objective of generating a new chain reaction. When Paul O’Neill took over the reins at Alcoa in 1987, the company was losing several million dollars a year. An internal audit convinced O’Neill to concentrate on a key issue: a quest for perfect safety. He launched the Safety First program, which put safety at the heart of the industrial process. This resulted in a domino effect that led to a change in the habits of employees and an overhaul of management and manufacturing processes, with significant improvements in productivity and quality.

Customer satisfaction at Starbucks: a force of habit
According to Charles Duhigg, good habits are the cornerstone of individual and group success. Starbucks has relied on such habits to consolidate its performance since the 1990s. A major challenge for the company’s CEO, Howard Schultz, was to turn a keen sense of customer service into a daily reflex for his employees. This turned out to be one of the key ingredients in transforming Starbucks from a sleepy little Seattle cafe in the late 1980s into a chain with over 20,000 outlets and a turnover of $13 billion in 2012.

Read our dossier
Change your habits for greater effectiveness

Based on The Power of Habit, Why We Do What We Do, and How to Change by Charles Duhigg (Random House, February 2012) and How: Why How We Do Anything Means Everything…in Business (and in Life) by Dov Seidman (Wiley, July 2007).
Business Digest nº 235, april 2013

How can you fight against your tendency to procrastinate? Relax, says Charles Duhigg. Why not just integrate it into your schedule? You will thus turn your bad habit into a positive habit.

3 tips to build healthy digital habits
Calm, Discernment, and Effectiveness Under…
Change your vision of business
What can you do when change is exhausting…
Previous
Next