Chindiafrique: China, India, and Africa shape the world of tomorrow 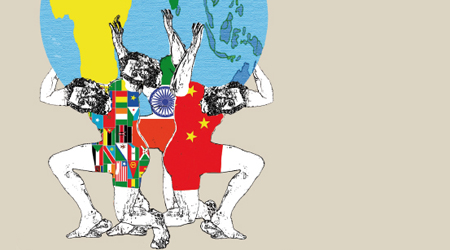 Our selection:
Go to Africa, and you’d probably be surprised to see how many Indian and Chinese businesses are already there. You would probably be even more surprised to see that the inverse is also true, with many African businesses now spreading across India and China. Within the next fifteen years, a new triad consisting of Africa, India, and China wille replace the now legendary threesome of Europe, United States, and Japan. With 1.5 billion inhabitants each, Africa, India, and China will account for 45% of global GDP by 2030, as opposed to their current 25%. The proximity of the three regions gives this new economic pole an additional edge. In fact, 500,000 Africans already currently live in China, a development few anticipated. Does this signal the definitive decline of Western economies, or is prosperity simply spreading? According to the coauthors, economist Jean-Joseph Boillot and journalist Stanislas Dembinski, the challenge for Europe, the United States, and Japan is to find their place in a new economy where the cards have changed hands. Above all, Europe must find ways of contributing to a balance of power in order to keep China’s dominating instinct reined in.

Why have we selected this book?
We are delighted with Chindiafrique, particularly by its discussion of Africa. This book overturns preconceived ideas about the continent of Africa by adopting a resolutely optimistic point of view. It presents a challenge to decision-makers looking for growth opportunities in seemingly gloomy Western markets to consider the innovations and new patterns of consumption currently taking place on this continent.

Chindiafrique
Upon the release of his book, Jean-Joseph Boillot discusses the concept of “Chindiafrique.”

A Global Perspective on Executive…
The Inevitable: Understanding the 12…
Innovation: Is China Taking the Lead in…
Responsible business, new ways of…
Previous
Next