“For the world has changed, and we must change with it,” said Barrack Obama in his January 2009 inaugural address. Applying this insight to gender diversity issues, researcher and consultant Michael Stuber adds, “What happens if you are not attentive to change? You disappear.” In other words, men who fail to recognize the strategic imperative for corporate gender diversity efforts are falling out of step with global trends. 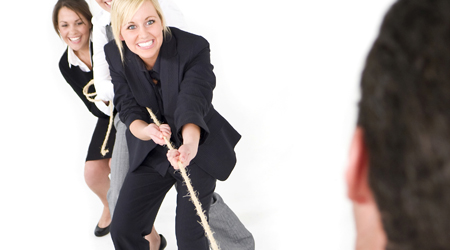 “Men need to understand that greater inclusion of women is strategically advantageous in terms of performance, growth, and innovation.”

Apathy, fear, and misunderstandings may explain why 74% of male CEOs believe their male managers are “unconcerned about gender equality” and “do not see a compelling reason for actively supporting gender initiatives.” To drive real change, discussions around gender diversity increasingly focus on the strategic significance of these issues for men. “Put another way,” says Katrin Bennhold of the New York Times, “the last frontier of women’s liberation may well be men’s liberation.”

1. Clear up misunderstandings and challenge gender stereotypes
The myth of a zero-sum game in which women advance only at the expense of men, a lack of recognition of ongoing male privileges, and adherence to traditional masculine norms contributes to men’s apathy towards corporate gender diversity initiatives. The solution is pointing out the strategic and personal advantages of gender equality for men. And challenging gender stereotypes, such as by discussing how there are more differences among individual men and women than there are between the sexes.

Business leader testimony
Georgia Power appointed Franck McCloskey as head of gender diversity in August 2000 — one month after the company was accused of racial discrimination. Multiple initiatives followed, with a strong focus on leadership skills development, such as leadership accountability, supervisory and management training, and communication and awareness. The strategy was to make adapting to a demographically shifting world a management issue, not just an organizational one. The approach brought results, with the company able to mitigate the alienation of male employees while simultaneously significantly increasing female representation (in combination with a 31% reduction in its overall workforce) from 1993 to 2010.

Read our dossier
Gender diversity is men’s business too!

Tagged with : performance, diversity, ethics & diversity
Share this post
Tweet
Published by Caroline Schuurman
Caroline is our editor-in-chief. She play a key role in shaping our editorial strategy, keeping a sharp eye on business research, publications, and trends and interviewing business experts and leaders from around the world.

A handbook to social and ethnic diversity
Information Overload: How to Stop Too Much…
Scarcity: Why having too little means so much
What is the state of corporate gender…
Previous
Next