Angela Duckworth sums up her psychology of achievement in two simple formulas: “Talent x effort = skill. Skill x effort = achievement.” In other words, effort matters twice as much as talent to success. And effort in turn depends on what she calls “grit,” or “having the passion to accomplish a particular top-level goal and the perseverance to follow through.” This hugely popular — and strikingly American – theory has its share of critics, such as Judith Shulvitz who writes in The New York Times that Duckworth “never question the values of a society geared towards winning, nor does she address the systematic barriers to success.” If Duckworth’s psychology of success arguably at points lacks nuance, she still provides a compelling argument against our well-documented, though unconscious, and seemingly irrational human preference for natural talent over effort (see box on “naturalness bias”). In other words, she provides an inspiring, practical reminder that: “Our potential is one thing. What we do with it is quite another.”

LEARNING TO GET BACK UP WHEN YOU GET KNOCKED DOWN
Grit is having the passion and perseverance to keep going no matter how tough it gets.

Passion and perseverance: distinguishing traits of high achievers
According to Duckworth, the world’s most extraordinarily high-achieving individuals all share a trait that she calls grit, or the “passion and perseverance” to strive relentlessly day in and day out, often in the face of great difficulty and failure, to achieve a goal. “In sum, no matter the domain, the highly successful had a kind of ferocious determination that played out in two ways. First, these exemplars were unusually resilient and hardworking. Second, they knew in a very, very deep way what they wanted. They not only had determination, they had direction. It was this combination of passion and perseverance that made high achievers special. In a word, they had grit.”

Grit is not a fixed trait: it can grow
In a 2007 study, Duckworth found that grit varies significantly by age, with people in their sixties or older demonstrating greater grit than people in their twenties or younger (see graph “Grit grows with age). Duckworth identifies two possible explanations: either the cultural era of older generations was more conducive to building grit than the modern cultural era, or, simply, “we get grittier as we get older.” While both explanations are probably true to an extent, her key takeaway is that you can become grittier than you are today: “Either way, this snapshot reveals that grit is not entirely fixed. Like every aspect of your psychological character, grit is more plastic than you might think,” she writes, going on to ask: “If grit can grow, how does that happen?” 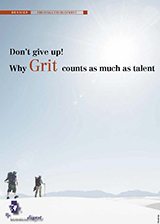