“In our organizations, politics, marketplaces and personal lives, we continue to enjoy the apparent convenience, neatness and short-term profits of imposing order, and fail to notice when it is sowing the seeds of fragility.” So writes Tim Harford in his book Messy. According to his compelling arguments and reams of scientific research, a preference for tidiness in work and life may make you feel safer and more in control, but, in reality, it tends to make you more fragile and vulnerable. Instead of relaxing into the neat and tidy, therefore, Harford urges you to consider all the ways in which embracing a bit of mess could boost your creative power and resilience.
How the mess of disruption boosts creativity
Harford presents a wealth of psychology research demonstrating a positive correlation between “messy disruptions” and creativity. But how and why does disruption unlock creativity ? In the words of influential English musician, composer and producer Brian Eno: “The enemy of creative work is boredom. And the friend is alertness (…) That kind of alertness is exciting.” Building diverse teams (in terms of experience, expertise, and cultural background), that collaborate transversally is a proven way to ensure creativity-boosting disruption within your organization. Another standard “messily disruptive” practice used by the world’s most consistently innovative organizations, including Google or 3M, is to have people work on multiple projects simultaneously. Harford explains that a technical term for this approach of mounting parallel project is “network of enterprises.” He lists four clear benefits:

1. “Projects cross-fertilize one another: knowledge gained in one provides the keys to unlock another.”
2. “Having several projects may seem distracting, but instead the variety grabs our attention.”
3. “While we’re paying close attention to one project, we may be unconsciously processing another – as with the cliché of inspiration striking in the shower. Scientists believe that this unconscious processing is an important key to solving creative problems.”
4. “Each project in the network of enterprises provides an escape from the others. In truly original work, there will always be impasses and blind alleys. Having another project to turn to can prevent a setback from turning into a crushing experience.”
Managing creative mess in your teams
The big challenge of messy disruptions at work is managing the equally messy emotions (namely, stress and frustration) that it provokes. Indeed, one of the most interesting findings that Harford presents in his book is around the feelings reported by “messy versus tidy teams” about their own performance, as opposed to how they are evaluated. Harford defines “messy teams” as those whose members change frequently and who work across geographical, functional, and departmental boundaries. In contrast, he defines “tidy teams” as being close-knit and having clear targets that they work single-mindedly to achieve as efficiently as possible. According to Harford, studies1 show that tidy teams report feeling happier and more confident in their results, while messy teams tend to report feeling unhappy and unsure of their results. And yet, in reality, messy teams are evaluated to be more productive than their tidier counterparts, with productivity defined by the quantity of value-adding output that they achieve. 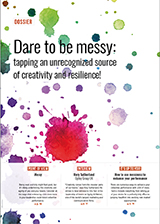 Based on Messy: How to be creative and resilient in a tidy-minded world by Tim Harford (Little, Brown Book Group, October 2016), and an interview with Rory Sutherland, Vice Chairman at Ogilvy Group UK (January 2017).