Looking ahead: the future of business technologies

The pace of technological breakthroughs accelerated over 2017. Here are 5 technologies about which you are sure to hear more in the coming years: VR and AR,1 vocal assistants and bots,blockchains, and clean autonomous vehicles!

How much progress did you make around digital transformation in 2017? Did you grow more inspired or more cynical about the impact of new technologies for your leadership and business? Regardless of which camp you fall into, technophile or techno-skeptic, your approach to digital technologies is presumably maturing along with the technologies themselves. Here is a panorama of the top 5 game-changing technological advances to emerge over the course of 2017!

1. VR and AR: bridging the physical and digital worlds

An explosion in AR and VR sales was expected in 2016 and 2017 but never happened, so why would 2018 be any different? In The Harvard Business Review, Michael E. Porter and James E. Heppelmann make a detailed case for the importance of these technologies to business strategy and operations in the coming year. Describing VR and AR as nothing less than a bridge between man and machine, Porter and Heppelmann explain how AR and VR translates 2-D information – data in the form of “pages on flat screens” – into our 3-D world. They point to existing business applications of AR and VR that are already achieving amazing results in how companies “serve customers, train employees, design and create products, and manage their value chains, and, ultimately, how they compete.” One of their most striking examples is the reduction of inspection time in manufacturing processes by 96% – from 36 hours to just 90 minutes – at Newport News Shipbuilding thanks to their integration of AR. Another example is the dramatic impact of AR on Boeing’s training processes, with those who train with the help of AR now completing their work in 35% less time than those using traditional 2-D supports. Even more strikingly, those who receive help from AR were 90% more likely to perform the operation correctly the fi rst time on the job! Facebook, at least, is convinced. CEO Mark Zuckerberg went all in with VR in 2017. At Facebook’s unveiling of a virtual reality headset called Oculus Go in October 2017, Zuckerberg told the crowd, “I am more committed than ever to the future of virtual reality,” following on the heels of his revelation of Facebook’s plan to invest over $3 billion in VR over the next 10 years 2.

2. Virtual assistants: the beginning of the end for your smartphone

The AI landscape entered a new stage of maturity in 2017. McKinsey & Company describes this shift as follows: “The idea of AI is not new, but the pace of recent breakthroughs is.” One of 2017’s biggest AI breakthroughs are virtual assistants who can manage your daily technology-supported tasks, released by no less than 3 of GAFA’s 4 members: Apple, Google, and Amazon. To put the impact of these assistants in perspective, imagine sending a text, ordering lunch, and setting up a meeting just by talking out loud… In other words, goodbye smartphones and apps!3 Meanwhile, Google isn’t just contenting itself with improving its Assistant. “They are adding AI to everything,” reports Inc.’s Lisa Calhoun in her coverage of Google’s May 2017 developer conference.4 Calhoun’s biggest takeaway from the conference is that Google / Alphabet is single-mindedly focused on becoming “the world’s AI platform.” She writes: “Alphabet is now in the business of AI.” !

3. Bots: why they matter so much for customer experience

“Bots are the new apps,” says Microsoft CEO Satya Nadella.5 Meanwhile, Evernote co-founder and former CEO Phil Libin writes in Medium that he hasn’t felt this way about a new technology since the first Apple smartphone was released 10 years ago: “This time, it’s conversational UX’s — bots for short — and the world is going to be rewritten again.”6 So. What exactly are bots? “Think of them as interactive services that provide a conversational experience and contrast them with traditional ‘static’ apps. In a static UX, you have to learn how to operate each control; push this tab to go here, then swipe left, then push the little ‘I’ button, and so on. In a conversational UX… you just have a conversation,” Libin explains. How does this differ from AI and the virtual assistants discussed above? Well, bots are a form of AI that can respond dynamically to your requests, but they are less specialized than virtual assistants and don’t necessarily involve speech inputs, or even texting. Their potential applications are, in one sense, humbler, but also wider-reaching. “Think less Turing test and more R2D2,” Libin explains. “Bots don’t have to be human; they just have to be fast and effortless.” Bots can rapidly dig through data, making them faster – and less invasive – than humans when it comes to customer service tasks like troubleshooting solutions and product recommendation. 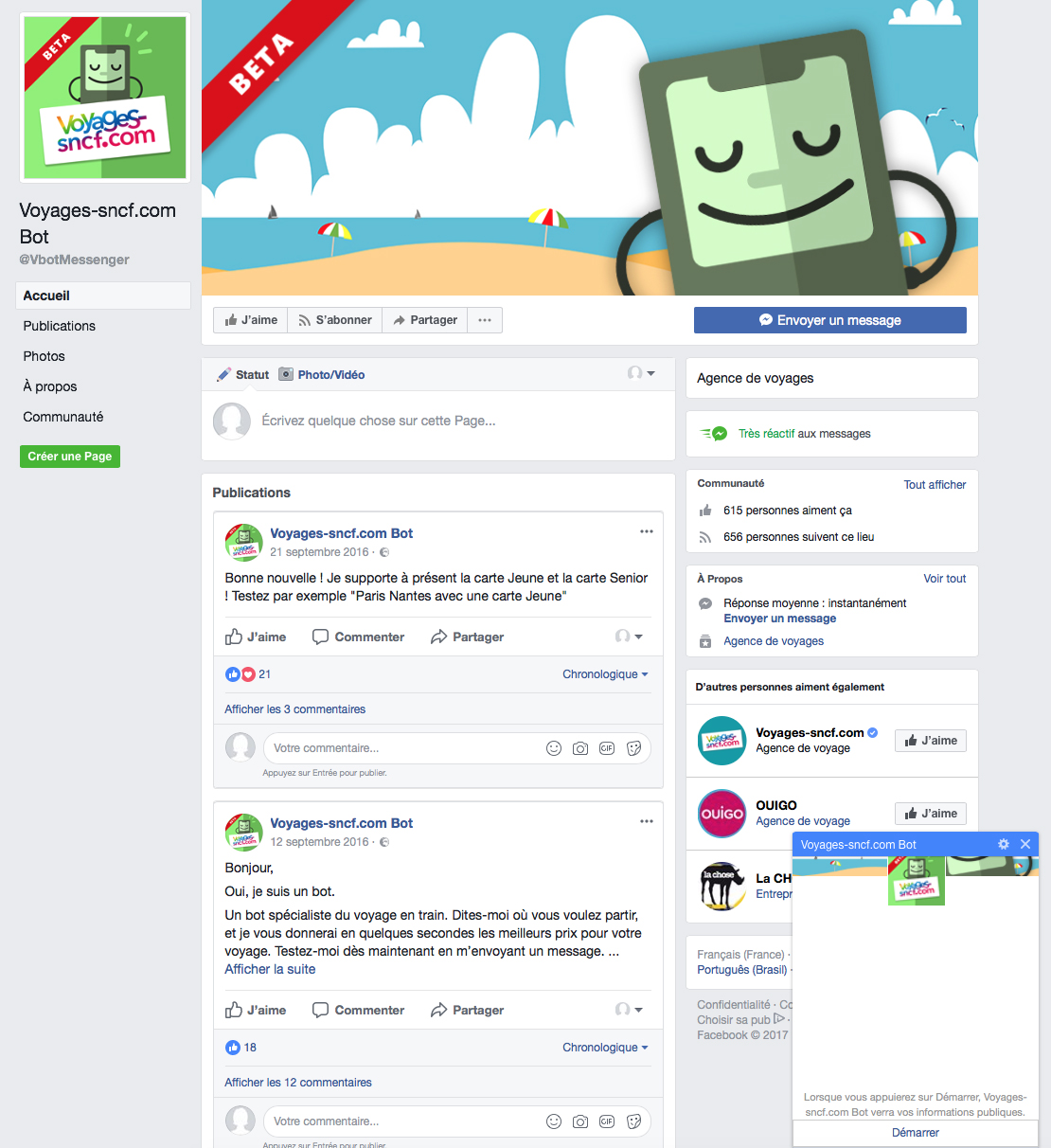 The Bot of VoyagesSNCF has its own Facebook page to chat @Facebook.com/VbotMessenger

Interest in blockchain technology has never been higher. Tech experts now agree that it seems poised to resolve many of the cybersecurity issues plaguing digital technologies.