The world is not flat !

New York Times journalist and editorialist Thomas Friedman’s The World is Flat: A Brief History of the Twenty-first Century came out in 2005. Friedman argues that the pressure of three decades of economic and technological change had “flattened” the globe, and that this was the result in particular of open sourcing, delocalization, and free, rapid access to information. 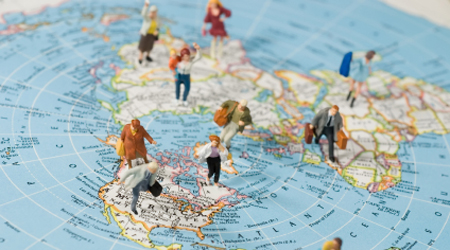 And yet, nearly 10 years later, multiple examples indicate that local clusters continue to drive the global economy now more than ever. Economist Pankaj Ghemawat is a fervent opponent of Friedman’s thesis, claiming that just 10 to 25% of the world is flat. Ghemawat notes that a mere 7% of telephone communications cross national borders, just 3% of the world population consists of first generation immigrants, and direct foreign investment represents only 10% of total global investments.

Is this an obscure issue for debate among economists? Certainly not, because the way in which the world is perceived has a direct impact on business organizations. Ghemawat claims that CEOs of multinational corporations are staying closed up in their home countries and culture precisely because they believe the world is already or soon to be flat. Consider their stagnation when it comes to localization strategy. They position themselves on the Indian and Chinese markets, firmly convinced that infrastructures and demand will automatically reach the level of standards found in Europe and the United States. As a result, they do not take sufficient steps to adapt to regional specificities. In fact, it is not surprising that barely 2% of Fortune Global 500 companies generate more than 20% of their income in more than two countries. Indeed, “multinational” corporations are generally deeply rooted in a single country. For example, in 2011 over 50% of BMW’s income came from outside of Europe, but 73% of its workforce was in Germany. This suggests that companies are trying to create a strong position on markets where their leaders are not present and they thus do not actually understand.

The World is not Flat!: Business Effectiveness in a Chaotic Universe

Based on the article by Navi Radjou, “The Rise Of Globally Adaptive Organizations”, Forrester Big Idea, December 2006) and the interview with John Gray, professor of European thought at the London School of Economics and Political Science (UK), and Shiva Kumar, vice-president Business Performance Initiatives, Enterprise on Demand Transformation, IBM.
Business Digest nº 173, april 2007.

With great data (and an eye-opening survey), the author argues that there’s a delta between perception and reality in a world that’s maybe not so hyperconnected after all.