Communicating effectively, getting our ideas across convincingly, motivating teams, persuading superiors to grant us a larger budget… We all work in sales now! In fact, we spend on average nearly three and a half hours a day on work that involves selling. What are the qualities of the best salespeople? How can we learn from them? 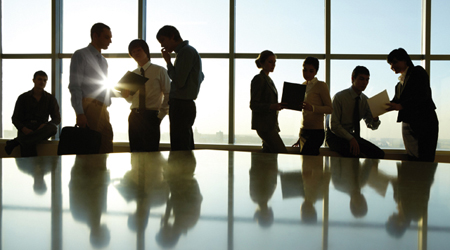 1 Be in harmony with those around you
The old “be aggressive, be tenacious, and flatter them” triad is dead and buried! There are three principles to refine if you want to convince people to buy into your ideas or projects today :
• Forget about power: a sense of superiority causes you to be less attentive to the reactions of others. Put yourself on equal footing with others to understand them better
• Analyze the context: To avoid trying to convince others in vain, map out the situation. Who influences whom, and who holds the power?
• Practice being a chameleon: studies have shown that subtly imitating the phraseology and posture of the person you are negotiating with improves your chances of persuading him or her.

2. Know how to bounce back
Resilience in the face of setbacks is a characteristic trait of the best salespeople. Here are three good practices to adopt:
• Quiz yourself in advance. Prepare yourself with questions like: “Will I get the right answer?”
• Stay positive. “Conveying positive emotions results in others being more open, more receptive, and more creative.”
• Don’t admit defeat. Above all, a refusal is based on one particular context: you still have a good chance of succeeding the next time.

3. Play the clarity card
Do you think that being vague enhances your powers of persuasion? If so, you’re on the wrong track: a good salesperson makes sense of muddled and complicated situations for others.
• Try to identify the right questions rather than the right answers
• Don’t overwhelm your prospect with too many choices: focus on what makes sense for him or her
• Emphasize how your solution is used rather than its technical specifications
• Don’t try to hide its less positive aspects

Vertical Software’s boss-cum-salesman
“I would never have believed that there are so many points in common between being a salesperson and being a boss”, says Paul Lebon, CEO of Vertical Software. “When I needed to find investors to set up my company in 2007, and today when I am looking to motivate my teams or negotiate new contracts, my greatest asset is knowing how to use a handful of marketing techniques” – a surprising admission from a company director who also says he had a long-lasting dislike of selling.

Read our dossier
Persuasion, negotiation, motivation: get inspired by salespeople!

Based on To Sell is Human: The Surprising Truth about Moving Others by Daniel Pink (Riverhead, December 2012), We are all salespeople (“Nous sommes tous des vendeurs”) by Evelyne Platnic Cohen (Eyrolles, January 2013), and the interview with Paul Lebon, CEO of Vertical Software (Canada), February 2013.
Business Digest nº 234, march 2013

Watch the video
6 Elevator Pitches for the 21st Century

Daniel Pink discusses the six pitches he developed in To Sell Is Human. In a matter of minutes you will understand how to draw inspiration from Pixar or Twitter to communicate ideas simply and effectively.